The sports and social media world is not afraid of change. The social platforms and the sports industry as a whole are constantly evolving, but it’s been a few years since something really transformational has happened in the biz.

After hearing several industry leaders discuss their strategies, insights, and observations about the current state of the sports business, social media, sponsorship, and fan engagement at the recent Hashtag Sports conference, it seems there could be paradigm changes coming out of the stay-at-home period from the pandemic.

Many athletes have seen the light of social media, corporate partnerships have been reimagined in a world without games, everybody has taken a closer look at esports, the social platforms themselves were utilized in different ways, and all the digital and social engagement has only reinforced the pathways of data collection to personalization. 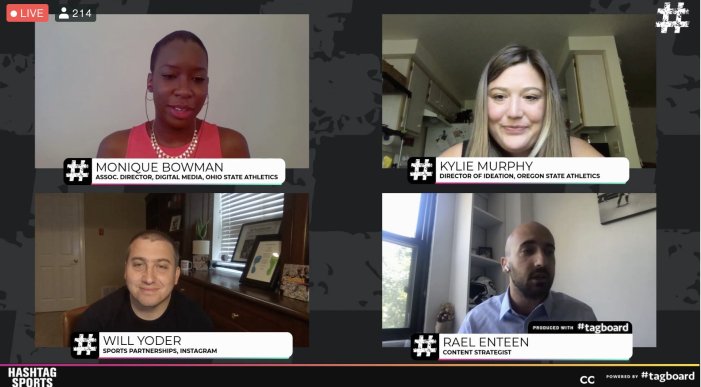 The past few months have felt like a year passing and the sports industry has evolved at a similar rate. Thanks to Hashtag Sports for putting on a great event! Subscribe to their newsletter, follow them on social media, and attend their future events.

On episode 135 of the Digital and Social Media Sports Podcast, Neil chatted with Keith Stoeckeler, Vice President and Group Director, Digital, at MKTG.

In July 2018, the Sports and Entertainment Alliance in Technology (SEAT) held its annual conference, this year in Dallas. The events brings together thought leaders from throughout the industries to discuss the trends of the day and learn from each other.

What follows is a collection of the best quotes, insights, images, and observations shared via Twitter #SEATDallas from the event. Thanks to everyone whose tweets helped fuel this recap and to SEAT for always putting together a phenomenal event!

On episode 123 of the Digital and Social Media Sports Podcast, Neil chatted with Kris Koivisto, Senior Director of Accounts for STN Digital.

In February 2018, the annual Sloan Sports and Analytics Conference, bringing together thought leaders from throughout sports business and analytics to discuss the topics of the day.

What follows is a collection of the best quotes, images, insights, and observations [business-focused] shared via Twitter on #SSAC18 from day 2 of the event.

Thanks to all those whose tweets helped fuel this recap! Be sure to also check out the day 1 recap.

In February 2018, the annual Sloan Sports and Analytics Conference, bringing together thought leaders from throughout sports business and analytics to discuss the topics of the day.

What follows is a collection of the best quotes, images, insights, and observations shared via Twitter on #SSAC18 from day 1 of the event.

Thanks to all those whose tweets helped fuel this recap!

The gym is an interesting place. There’s people of all shapes and sizes utilizing a vast variety of routines and techniques often with different goals in mind. Some are trying to lift the heaviest weight each time, some are trying to burn the most calories, to build the biggest muscle, and so forth.

And yet we can’t help but compare. Can’t help sizing up the person on the bench next to you and taking it as a challenge to outperform him or her. But is it fair to compare unless each person in this scenario are the same size? Are their objectives the same? Is this habit of comparison, to try and best the biggest and strongest in the room, the best road to success?

The gym analogy works well to describe the varying challenges of what it means to succeed in social media. When leagues often inform their teams of where they stand in the rankings across a number of team digital and social media metrics, it can be easy to get lured into obsessing over where your team stands. And it can get even more difficult to avoid it when leadership joins the fray, thinking they can win the championship of social media as easily as they can the league title.

But not every team is a 6’5″, 300 lb. behemoth. When dealing with gross metrics, follower sizes, website traffic, video starts, et al. – it’s not a fair fight and it’s not a worthwhile  comparison for either side. And yet, just like FS1 wants to beat ESPN, it can sometimes be hard to get away from these lists.

It’s not so black and white, however. Even those atop the rankings may not be ‘winning’ in a traditional sense. They may not have a strong brand, an engaged audience, a graph of their metrics on an upward trajectory. The most important benchmark is your team’s stats last month, last week, last year.

That’s not to say benchmarking against one’s (relative) peers is a bad thing. There was an interesting Twitter exchange recently in which some respected pros in the space lent opinions on this topic. Of benchmarking, the well-respected Senior Director of Social Media Strategy for the New York Yankees said it can be “extremely motivating when done right, and extremely chaotic when done wrong.”

If it’s done in alignment with the organization’s goals, that allows them to not just maintain but strengthen their brand and their affinity of their fan base — a desire to move up the rankings can lead to greater investment and resources.

But even then it’s important to mind the metrics that matter most. It’s not easy to measure, of course, but it’s not impossible to develop meaningful metrics that  can be shown to drive the fans and the brand, that contribute to the bottom line. Those are rankings that are harder to come by, but those are the ones teams should value the most, vanity be damned.

This is all easier said than done, of course. And it takes evolution across the board, most importantly from the leadership up top. Because for generations it was fairly black and white; we didn’t know better nor could we measure better. But defining success is more a science than an art these days, social media and sports is growing up. Pat Muldowney, Director of Social Content for The Ringer, who previously spent several years in social media for FOX Sports, summed it up perfectly.

“Most of the requests for this type of [rankings/vanity metrics] reporting come from a level of leadership that’s familiar with ratings or traffic as barometers for success,” said Muldowney. “Instead of ‘Are we succeeding?’ it’s ‘Are we winning?’ Hopefully this will evolve over time.”

So we return to our gym rat, who now realizes everyone in the gym may be defining success that day in a different way. They’re all out to get better every day, to achieve a level of health and fitness, but they’re not all chasing the same numbers. They’re trying to succeed themselves, not trying to win the weight room. Their only benchmark is themselves.

You can see much of the original Twitter thread here