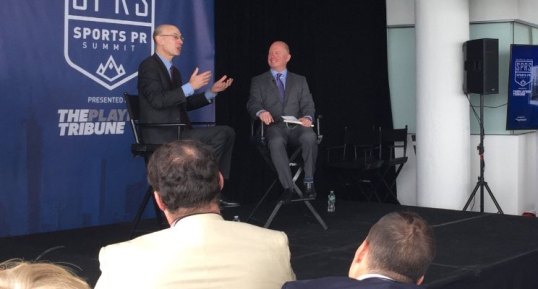 The volume of stories and the ways with which to tell them is only increasing. For many in sports, this is an opportunity. While some may avoid the always-on, highly scrutinized, no holds-barred nature of new media, the savvy embrace it, and run with it. This theme peppered the chatter at the 2017 Sports PR Summit, held at the Players Tribune in May. A few key topics that arose included the ability for athletes to create and tell their own stories, the NBA treating social media like a grown-up, and ESPN’s venerable Tom Rinaldi dropped some memorable quips on storytelling.

When scores, highlights, and the usual quotes are easy to come by, it’s the stuff that shows fans a little about players off the field that can win and differentiate. There is increasing demand for fans for such content and teams and media are answering it.

“People want to know athletes are real people and they can relate to them,” aid Mary Byrne, Senior Deputy Editor/Daily Coverage for ESPN.com.

Social media has given fans a window into the lives and personalities of their favorite athletes. And the media isn’t blind to the fervor with which fans treat an Instagram post or Tweet from an athlete showing a bit of their life off the field or their personal thoughts, in general. For Brian Cohen, Talent Producer for Good Morning Football on NFL Network, social media feeds are a producer’s dream – offering not just clues,but clear signs of an athlete’s interests and of which athletes are vocal and, well, out there.

“We dig deep into the feeds of athletes to find who they truly are…their interests, community involvement,” said Cohen. “The more open they are, the more likely we are to invite them to the show to share their story.”

A panel of athletes confirmed these sentiments later on; more and more recognize and appreciate that the paradigm has shifted. That they no longer need the media to get a thought or a story out there. Former NBA player Etan Thomas said as much, noting that social media outlets allowed athletes like him to go past the writers and media and to tell their own stories to fans.

An interesting insight that was shared via one of the athletes, NFL star DeMarcus Ware, was the need for trust. Ware, who said he picked up upon the importance of trust, from the lessons at the NFL’s broadcast boot camp. When athletes trust the media or the team or the reporter to be genuine, to be true to the story – that’s the way it should e.

Why the NBA has thrived with new media

Many sports have done well to embrace social and digital media, but the NBA is typically the one held up as firing on all cylinders. It’s not by accident. It is largely thanks to the leadership of Commissioner Adam Silver, who, well, ‘gets it.’ The league appreciates that social media is something to be embraced, not shunned or feared. It is an opportunity the NBA seizes to be their own media, to speak with an increasingly discerning fan base.

“You can no longer rely just on the traditional media outlets to get your story told,” said Silver in an excellent interview. In telling their story, Silver knows the NBA can’t use smoke and mirrors, but must be genuine. “Fans have pretty good BS detectors” he said. “So you have to be authentic.”

Silver went on to note that the league staffs social media 24/7, to engage fan all around the world at all hours. In keeping with the theme of being proactive, and not reactive or fearful, Silver has led the NBA to not just turn a blind eye to fans using game highlights, but to even encourage it (and the NBA has certainly facilitated so).

The NBA permits ‘liberal’ use of highlights and puts their protective efforts into their live game feeds. It’s not that the league has given up on protecting highlights. Qutie the contrary, they don’t see a need to ‘protect’ highlights – they are helping to promote the league and facilitating fan-generated content that markets their sport and their league.

Said Silver – “Our view on highlights – it’s in our interest to get them out there.”

Sports media is everywhere. The league is a form of media, the reporters and newspapers and TV partners are media, and, yes, the fans themselves are media. Silver is savvy enough to realize that the enormous proliferation if NBA media is nothing but a good thing.

“It’s important to us and our leagues that the sports media thrives,” said Silver. The more bloggers, the more reporters, the more sick edits there are, the more interest and content that is out there that is promoting the NBA. Want to know why the NBA has thrived on social media? Look no further than Silver and his mature look at the landscape, understanding it’s something to be fostered, not feared.

You’ve likely seen a Tom Rinaldi feature story on ESPN. And, if so, you’ve likely smiled, cried, and felt a surge of inspiration of joy. It all probably happened during the same story. Rinaldi seemed to blow the conference as he talked about the science of story. The ESPN legend invoked the undulation of a wave to hammer home what draws one into a story, and takes them through the emotional swings of the his well-crafted tale.

“The key to stories is waves, not lines,” said Rinaldi. “Highs and lows vs. just a box score.”

Rinaldi enumerated his keys to a story. First, one must build a sense of expectation and anticipation – there has to be that waiting for the payoff. A good story also reveals a new understanding. The surface-level box score gives way to a greater understanding of the subject matter as the story ensues. Finally, Rinaldi said a good story reveals a ‘transcendent’ fact. That’s the wow moment. The finale of a Rinaldi roller coaster and the keystone for a strong story.

Sports drives more compelling stories than the pen of even the most gifted authors because it has all the elements – exciting action, peaks and valleys, and real humans who just happen to be able to do superhuman things in their sport. Take a cue from the lessons learned at this past year’s Sports PR Summit. Do what’s right. Be on the right side of history. Build trust, be authentic, don’t be the bad guy or the untrustworthy guy, and invite and tell stories that make fans feel.

PR used to be a bit too much about smoke and mirrors. But today it is so much more. There are fans sharing stories, players telling theirs, and leagues who no longer stand in the way, but can be on the same team. It’s a game everybody can win.