Instagram Stories were first introduced about a year and a half ago, and the way sports teams, leagues, and media entities have utilized them have evolved quite a bit over the months. Many started out by taking their Snapchat content and replicating it onto IG Stories — ‘Now that raw content people love so much on Snapchat can be exposed to a wider audience.’

As the number of Snapchat users has started to stagnate, it seems (at least anecdotally) that there is greater thought, attention, and effort being put into creatively using Instagram Stories, to earn the coveted taps and eyeballs and time spent that so many fans worldwide give to IG and IG Stories. It’s really a progressive transformation of the ‘stories’ framework, in general. It’s snippets of larger content pieces, active engagement with users, stories  that fans can’t help but complete, listicles that can be consumed more easily in a mobile app than on the web, and allowing fans to consume substantive content at the pace they want in the snackable form they want. Here are ten uses of Instagram Stories (mostly) that have stood out recently:

SportsCenter gives us an interactive, bite-sized version of its ESPN The Magazine Story

The visually appealing graphic and invitation to continue is immediately stimulating. Then, we get the chance to ‘answer,’ the story come to life and driving engagement, not just consumption. The Swipe Up CTA at the end puts a cap on a great, shrunken down snippet of the story that invites drives fans to want to continue on with the quiz. This ‘trivia’ idea can certainly be utilized by teams and others in sports. The pull, of course, is creating a need to continue/want more.

The SportsCenter social media channels continually deliver quality content and studiously execute on each platform in a relevant and effective manner. Recommended follow across the board. 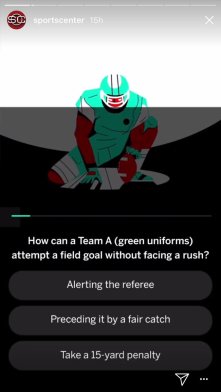 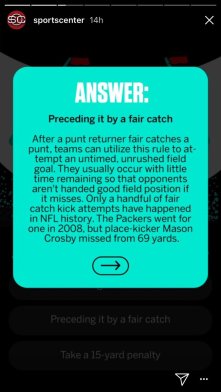 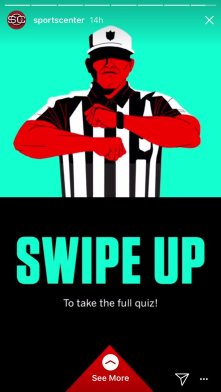 BarDown (by TSN) gets visual with polls

Twitter polls have become a routine part of Twitter now, but many have lamented that one couldn’t include videos/images/GIFs with them. We know visual content typically performs/engages better and yet the most interactive of tweets – polls can’t include more media (though that is changing now). Well, when Instagram Stories introduced polls, it allowed for an even better marriage of visual polls, and TSN’s BarDown took advantage of that on an NFL Sunday. It’s simple engagement, offers an immediate payoff for the fan, and is an easy way to present the storylines of the day. BarDown is sneaky good at engaging their fans north of the border. Check ’em out on Twitter, especially. 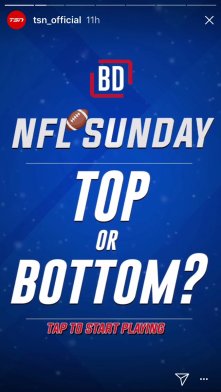 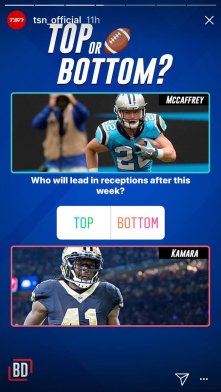 Sacramento Kings give us game content in visuals and taps

Even as the way fans consume content changes, the stories and the substance have some semblance of consistency over the years. They’re just more snack-sized, interactive, and visual. But look at this example from the Sacramento Kings (who simply dominate Instagram engagement), which gives you a little interaction, a quote, and a team stat leader. It’s all inherent to the platform and allows a fan to engage with the brand and be caught up in a matter of seconds. Even better, there is a consistency of look and feel that, if one is tapping rapidly through stories, instantly stands out as your team from Sacramento. 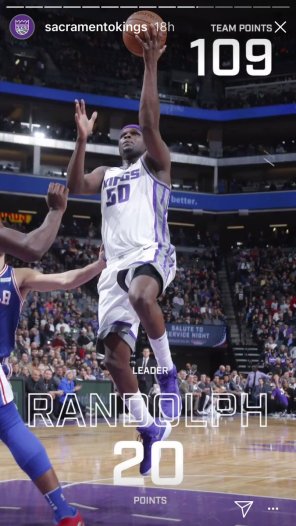 If you want to see sponsored content in action on Instagram Stories (in a good way), follow the Orlando Magic. Whether it’s the Kia Keys to the Game or, as shown here, the Fan Duel Stat Stories, the Magic deliver content that has value for fans, while effectively integrating a partner. This is the type of informative content that has been produced for years by teams — game previews, stats leaders, et al. — and Instagram Stories presents a unique way to deliver it to fans. Adjusting the presentation to tie to a sponsor keeps the value in the content for fans, while exposing the partner to fans. The Magic are great with their social media and corporate partner activation on all platforms, and they’re one of the few who have consistently excelled on Instagram Stories.

I am a professed Raiders fan, but there is no bias needed to recognize the awesomeness in this example. The Raiders really do a tremendous job on Snapchat, as well, and whie Snapchat focuses on the raw content fans have come to expect, Instagram is a visual narrative that brings to life each game and each day. They took a single photo, taken as the Raiders celebrated a touchdown, and injected it with a mini story that puts into an Instagram Story what may be an exchange between friends. They circle various fans in the photo and add a funny caption referencing how they’re reacting (bonus points for the ‘For the Gram’ reference). It’s lighthearted, it makes you laugh, it makes you want to keep clicking for more, and it has you spend more time with the brand, while feeling those positive feelings. How can you make fans stop and spend time with you on the platform? The ‘engagement’ we all seek is even stronger when it comes with a smile on the fan’s face. 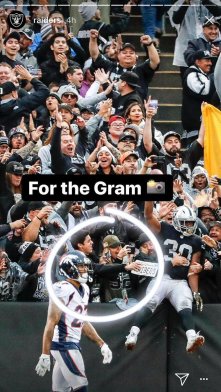 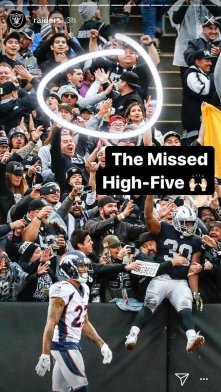 Major League Soccer does a great job creating content for the league’s platforms and they, made the most of the days after Toronto FC clinched the club’s 2017 MLS Cup. What would typically be a photo gallery, featuring the rings for the last several MLS champs, becomes a fun, in-your-face (in a good way), illustrated countdown of MLS Cup title rings for the last 20 years. Countdowns and lists are ubiquitous in sports, and Instagram Stories offers a different way to present this content to fans. Going with artistic illustrations over straight photos seems like a no-brainer in hindsight, but was certainly the right call for what fans come to expect on Instagram Stories. 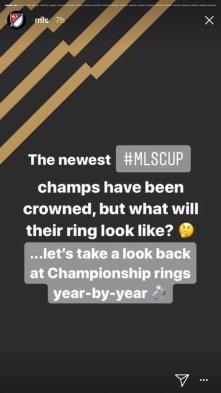 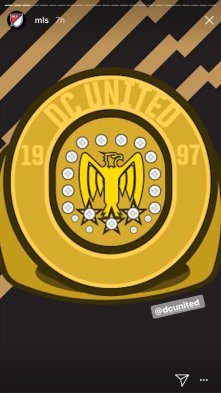 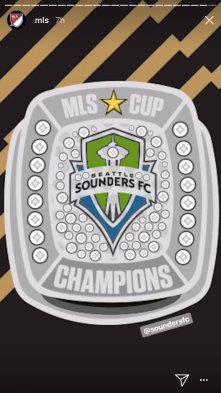 Ok, so this is an entry from Snapchat, but is really just an excellent use of the ‘Stories’ method of presenting content on social media. The Bulls have continually pushed the envelope on Snapchat, treating their presence there as an entertainment channel, as opposed to strictly a team correspondent. Here, they take a tried and true concept (Where’s Waldo, any Millennial knows it!) and plug in their mascot Benny, and then fans (like me) spend a ton of time carefully scanning the snaps to come, trying to find Benny. It forces me to not just tap rapidly through the Story (from the game), but stop and spend time on each one. It’s fun, it’s engaging, and, at the end, offers a chance to win tickets for finding all four Benny’s — and helps the Bulls get some fan info from Snapchat and test the platform as a lead generation tool. Great work, overall here, and use of Stories.

Snapchat has often fancied themselves as more like TV than anything else when it comes to its non-messaging content. In addition to exchanging messages with friends, fans come to kill time and be entertained. This ‘Question of the Day’ feature is a great, consistent content piece that wouldn’t be out of place as a kicker on a pregame or halftime show, or on a video board during a media timeout at the game. The first-person nature of the platform, along with the ‘fun’ questions the team knows work well on Snapchat, where fans wouldn’t appreciate the football-infused cliches, endears the players to the fans so well – always a good recipe for content. The consistency of it also presents a sponsorship opportunity, as well. This would certainly work on Instagram, too. 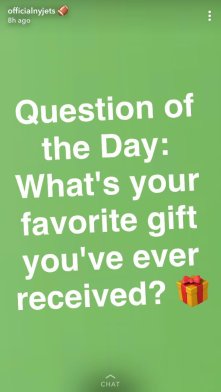 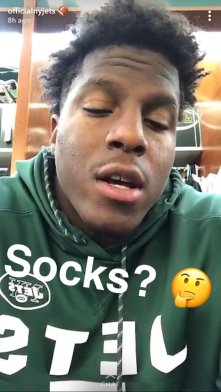 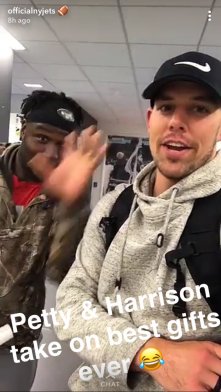 So this last one is outside the sports world, but McDonald’s showed some great creativity here that I’m surprised those in sports have not used much on Instagram Stories (and, hey, Mickey D’s is still a pretty active corporate partner and advertiser in sports). They took what would normally be dismissed as an ad and invited fans to tap-tap-tap to create an animation-like effect. I’m also normally not a fan of super-long Instagram Stories with so many notches, it’s scary, but, again, this was all in the hands of the fan to tap as quickly as possible to crack the ice. It’s fun, it feels interactive, and it has fans also starting at the $1 for any size drink messaging/promotion. It’s a simple concept and use of the Instagram Stories UX, and it’ll be cool how others continue to get creative on the platform.

Stories have always ruled the day, but after it took centuries and decades to go from books to radio broadcasts/shows to moving pictures with captions, to talkies (yep!) TV shows. And then the last 20 years or so as digital gives us a new way to share and produce and consume content seemingly every day.  And with a fan base that’s more fragmented across channels and platforms than ever, the temptation may be to reshare the content you’re already creating to show these new eyeballs what they’re missing.

But the best treat the platform or the feature like a subject to study — all the ways it can be used, why fans use it, how they use it, how others use it well and not so well, and how to best measure success and engagement on it. As many say, good content remains good content — make fans laugh, teach them, give them access, convey personality, be interactive and engaging, be visually stunning – features like Stories just open a new palette to paint the canvas. Focus on making fans smile and making them care, respect the platform, and you’ll be on the right track in your story.