For about a decade now, may of us have been walking around with mini computers in our pockets. Access to media, to information, to apps, to, well the World Wide Web. So the question for content producers and brands becomes – how can that mini computer be utilized to add to experiences.

Augmented reality – and how it uses the phone’s camera to bring up content based on trigger recognition of physical objects. Pictures can literally come to life. For the most part, AR is being used to trigger content delivery, to be overlayed in the real world using the camera.

You have likely seen AR in the Pokemon Go App, and it is now making inroads in sports and sports media more than ever. From bringing up interactive games to supplemental info and content, AR is allowing content to be found and enjoyed using nothing more than the phone’s camera and some trigger.

I recently checked out an AR-fueled edition of the Sports Illustrated magazine. While their print sales have no doubt fallen over the years, they’re bringing more value by making their magazine come to life, and delivering content that goes beyond just the pages in the mag. The use of AR should evolve quickly, but here are a couple of takeaways from the SI experience (which also included 360 videos, as well as VR content – which I plan to try)…

There was an article about a college football player, which included quotes from his friends and family. Want more? Hold your phone over the page and a video feature story pops up that goes beyond the content in the article and greatly enhance the emotional response to the story.

While the functionality wasn’t perfect at first, I was more than willing to spend a handful of extra seconds to get it going. This delay and imperfect quality is okay for now – the novelty and the ‘I gotta see this’ is still kickin’ – but it will become less tolerable over time. The Life VR app – while very large data-wise – easy to use to access the AR content and 360 videos.

A story about an NFL draft pick gave a glimpse at the interview between the author and the player, allowing deeper insight into the content of the article. This was a solid supplement  and there is a certain novelty to watching the video on the pages of the magazine as opposed to directly on my phone’s screen [the only ‘AR’ thing happening here, differentiating it from a QR code pulling up a link on my phone].

The novelty of watching the video on the page was there, but even the best supplemental content is still, well, the same content I could see on the phone screen, while I continue reading the pages, too. So where can this all go? Anyone’s guess is as good as mine, but it’s going to be about making the content smarter and more aligned with the physical world aspects triggering it.

What could this mean? Maybe it’s a full page photo showing our player on behind center, and all of a sudden he takes the snap and drops back for a touchdown pass right there in front of us, almost like a hologram. Or maybe he has a tattoo that means a lot to the story and – boom – that tattoo appears on my forearm [through my phone’s camera] to step into his shoes and get a closer look. 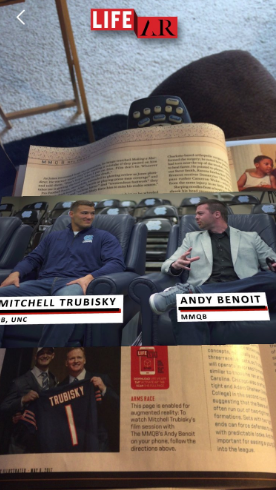 We’re just getting started with focusing on the reality part of AR, and it will be cool to see our connected world get even cooler.

Where it can go next

How can sports media capture more and more attention and bring more fans to their real estate (apps, et al.), especially during live games – that most valuable of all time? Augment real-time reality. One can only imagine what that could look like. Hold your phone’s camera over the football field and maybe you can toggle to track the speed of a wide receiver on a given play, get a player in your phone camera while he’s in the batter;s box and check out his fantasy stats and whether he’s available in your league, scan your phone over the crowd and see small dots or spotlights noting the presence of a Facebook friend or LinkedIn connection. When augmented gets more real, the usefulness of the use cases are, well, augmented.

In addition to the AR content, the Life VR app also had 360-degree video and virtual reality content to go along with the story in SI capturing a journey up Mount Everest. This more immersive content, which requires undivided attention, brings another element to the content not possible with just AR. With every VR and 360 experience [perhaps still because of novelty a bit], I am overcome with the desire to, well, look around. To check out of all the surroundings with an air of anticipation, not knowing what could be behind me, next to me, or above me. 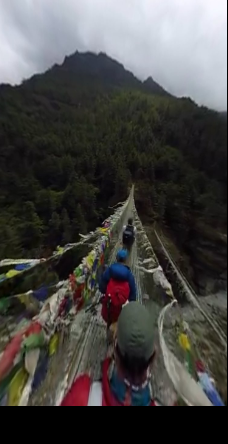 There is a value to being an early mover in VR and AR, capitalizing on the curiosity, novelty, and interest [provided more and more sample the tech and adopt it] in thee new media features. The best thing one can do for now is to sample the content out there, learn about it, study it, talk to others about their experience with it (especially the newbies! And especially the youngsters!), and, then, figure out if it’s right for your fans, for your content, and for your objectives.

Remember to be additive to the experience. And remember, in the long run,  to try and heed both words in the term ‘augmented reality.’