It’s playoff season in the NFL, which means 17 weeks of regular season games have passed. The social media teams behind each club have had weeks to experiment, study, hone, and create. The playoffs began this weekend and not only was it a chance for the league’s better teams to take the field (sorta), it was a chance for their social media squads to shine on a grander scale.

Read on and take a look at some of the standout social media content and strategy that came from the eight NFL teams in action over Wild Card weekend.

While some content can get tired and stale, 360-degree content is far from that description and a few teams busted out some 360-degree content, specifically on Facebook, over Wild Card weekend. First, 360-degree content is by no means easy, but Facebook has made it easier than ever. The trick, too, is to make it worthwhile for the user to want to look around. I was particularly impressed by the Miami Dolphins producing 360-degree video, including going to suggested angles while also allowing personal navigation. 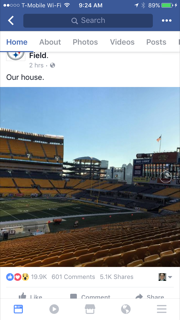 The Seahawks put out a pregame hype video, full of emotion and visuals, on all platforms. Al the other teams did something similar, but the Seahawks’s video on Facebook including captions. This helps enhance engagement, with lots of video views occurring with the sound off, which would’ve made the narration useless.

A few of the teams stood out with their use of Instagram Stories on this Wild Card weekend. The Detroit Lions took full advantage of all the features, including @ mentioning players in their posts and utilizing the Swipe Up. They also effectively integrated a sponsor. Meanwhile, the Packers and Seahawks had some excellent graphics, with the Packers providing a game preview and the Seahawks killing it with some real-time content. 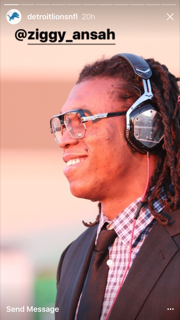 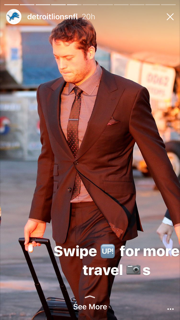 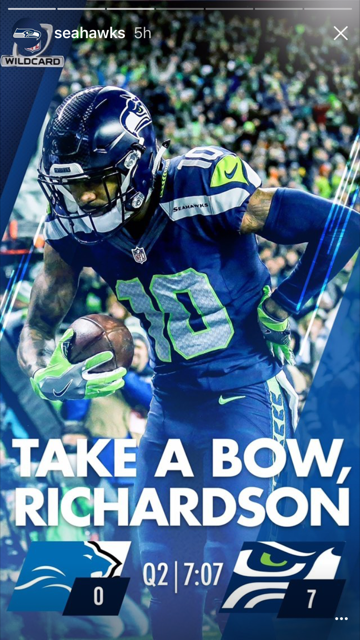 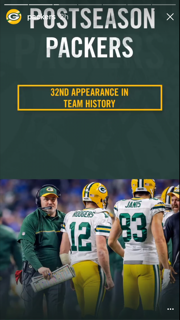 Fun with Emojis on Snapchat

So, yeah, teams have used emoji on Snapchat before. But the time the Packers took to add emoji to a couple of Snaps in their pregame story made the ‘usual’ locker room pics that much more fun.

The Right Place at the Right Time

Just like players and coaches game plan, so do social media teams. After 16 weeks of games, they know where to be or how to find out where to be and when. The result is capturing some unique, awesome content. Making sure to be in the right position is half the battle. Check out the Raiders’ Snapchat knowing to be there to let fans watch players tap the win sign on their way out. The Seahawks were able to make sure someone cut through the crowd to capture opposing players exchanging pleasantries after the win. Fans of the Steelers were treated to an emotional pregame embrace between Big Ben and LeVeon Bell, while Packers fans saw a pregame routine of ball spinning. The social media teams were executing the game plans all day long. 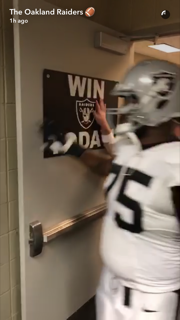 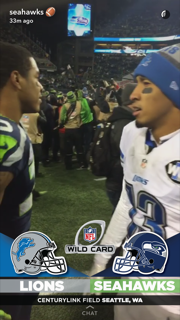 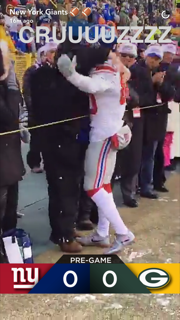 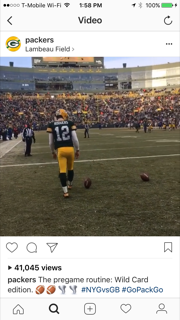 It has been great to see this ‘trend’ grow across the NFL on social media, and this Wild Card weekend brought some excellent examples of personal messages via social. We got a thoughtful pregame message from the Giants, some real-time talk from the Raiders and Seahawks, a Steelers player heating up fans in the cold, and, coolest of all, Raiders head coach Jack Del Rio exhorting fans via the team’s Snapchat. There is a lot of emotion, focus, and routine on game day, so good on these social media teams to be there and to have developed the relationship to have that access and serve as that trusted conduit to share it all with the fans. 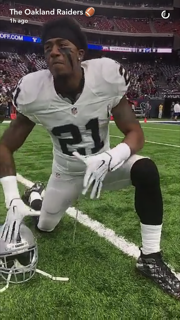 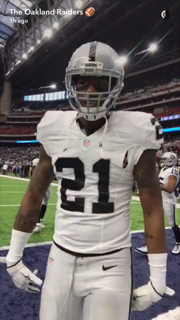 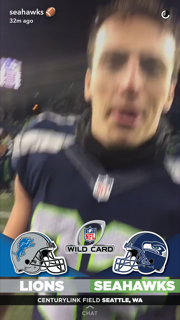 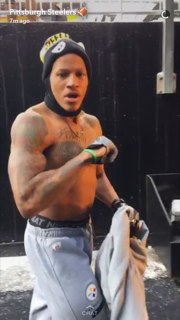 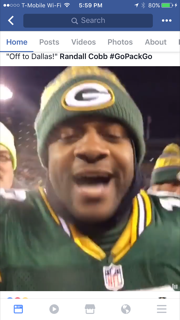 The Pittsburgh Steelers and Houston Texans were able to activate influencers on their social media platforms, while the Raiders made the most of a message from former star player Charles Woodson (there for ESPN) and they also retweeted some ‘celebs.’ (The MC Hammer retweet is a weekly occurrence for the Black n Silver). 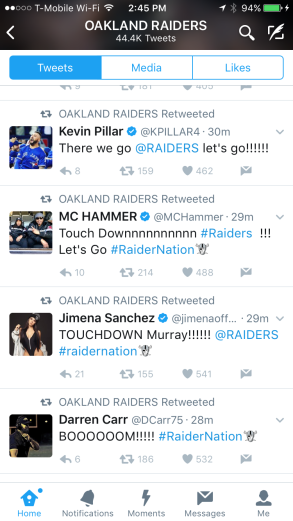 Twitter is a fast-moving medium during the game, especially when big plays occur. The Pittsburgh Steelers did a great job (and usually do) at engaging fans on Twitter using the game with thumb-stopping visual tweets and good use of the scratch-reel GIF (content with which it made sense to utilize). They also threw out a funny ‘Touchdown’ dictionary.com graphic, inserting star WR Antonio Brown. When you have a stud like Brown, using the same GIF over celebration routine can get stale – the Steelers step it up. 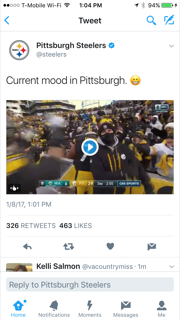 Every week is a chance for teams to give their fans something unique, something new. Especially in the playoffs. The Houston Texans (though they have done this before) slapped Snapchat Spectacles on the flag bearer and fans got to experience the spirited sprint into the stadium. The Steelers also used Spectacles to give fans a look at the field and a feel for the elements. The Detroit Lions, meanwhile, planned and produced a shoot at famed Pike’s Place in Seattle, tossing a Lions helmet instead of a fish. Finally, I was struck by the overhead view of the Green Bay Packers pregame huddle jumping around that the team shared on Facebook and Twitter. While we may be accustomed to such unique angles on professional  broadcasts, it was cool to see this coming straight from a team. Finally, a nod to the Seahawks who minded their copy to turn an Instagram post from good to great. 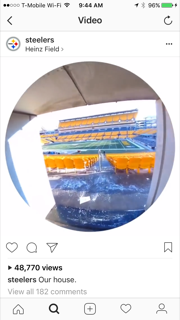 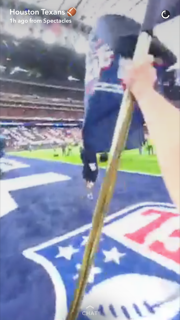 In the midst of preparing so much (fire) content for fans to consume, it can be easy to forget about showcasing the fans there to cheer on the team on game day. The Houston Texans, in particular, did a good job of showing off some of their fans on Saturday, as well as all week, across digital and social. They also made sure to get a shot of a couple celeb fans there for the game. 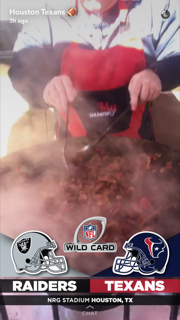 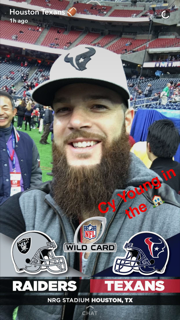 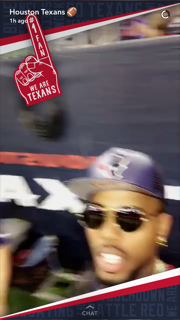 The Texans also had a sweet ‘frame’ for their Instagram photos, with players posing in the locker room before the game.

Video is king right now and its reign appears to be a lasting one. Every team had at least one hype video and there was also a lot of quick video, especially Snapchat and even Twitter (in the case of the Texans). Meanwhile, the Dolphins got major views with a handful of produced, emotion-infused videos on Faebook (and repurposed elsewhere). Kudos, too, to the Raiders for showing the post game locker room from head coach Jack Del Rio, not so easy after a loss. The Seahawks turned around some produced, but real-time content effectively, as well. A few of the teams also cut to live or taped reports from on the field with team reporters, content which always seems to do well for teams. 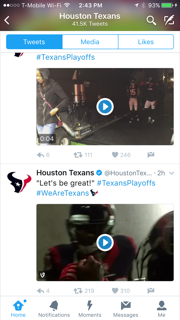 And a quick nod to the always awesome visual work from the Dolphins photography and graphic team. This is just a couple posts. All their platforms showcase the photos effectively and beautifully.

You know that little button under your Facebook header photo – that often says Contact Us, Get App, Shop Now, etc. Well, the New York Giants took the time to change their CTA button to ‘Watch Video’ and link to a game preview on their website for their matchup against the Packers. Quite the attention to detail to leave no stone unturned for content.

There is little doubt that social media is an inherent part of the fan experience on game day. More eyeballs than ever are on the platforms of teams with national attention on them in the NFL postseason. Every media outlet, reporter, and fan is more engaged and putting out more content, and the competition for attention and love is fierce. It’s also a great time to learn!

As the road to the Super Bowl continues, keep your eyes open and your ears peeled because new social media tactics, ideas, and innovations are playing out on a national scale in real time.