There’s nothing like a college football Saturday. And with each passing season, the tonnage and creativity of content continues to grow. While many settle in, kick back, and take it all in (phone in hand), I have my eyes wide open, trying to learn as much as possible from all the content, strategies, and posts coming from all directions.

I can’t help it. But it’s fun. And while I will readily admit I likely missed 99% of the content put out there, here are a few, unique themes (and examples) that stood out to me:

Going Live When You Can

Anyone that works in sports knows a lot of content is off-limits. When content ownership is valued in the millions, there is simply too much at stake to risk overstepping one’s bounds. But while some may lament and complain about it, others look for what they CAN share and how they can use the access and content THEY own.And the results came. 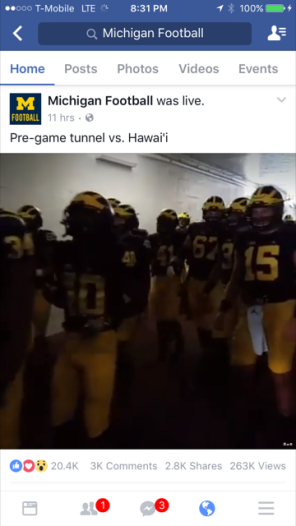 Whether it was Auburn capturing the Tiger Walk, UCF having their phone ready on the field after the game, a pre-game walk down the tunnel at The Big House for Michigan, or (though not live) a peek into Wisconsin’s post-game locker room after their upset of LSU, so many teams killed it, even having to navigate the times and nuances when sharing video content was off-limits.

If this past year in sports was about having pre-baked GIFs prepared for touchdowns, interceptions, sacks, fumbles, (and similar for other sports), a small next step is customizing GIFs for players. Not only does this deviate from the same-old stuff that can get old after one game, let alone an entire season, it makes fans more familiar and more in love with the individual players – a key factor in driving emotional fan attachment to a team in any sport, pro or college.

Beyond the personalized GIFs is the increasing speed with which GIFs are created across the board. From a shot of fans cheering from that game to a GIF that one can loop over and over of a sick move or hit in a game, content teams are getting bigger and better and faster. 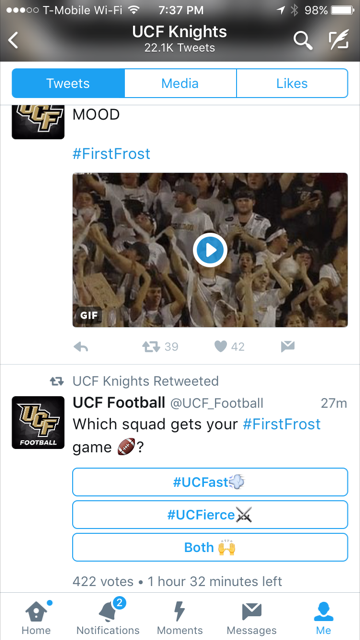 Just a tiny sample here, but so many teams had custom GIFs for players that would be making big plays throughout the season (Clemson also stood out with this) or a GIF template that could be quickly tweaked to at least add in a player’s name, teams are realizing more and more that going into a season with a half dozen GIFs and then calling it a year is not the best idea. GIFs are also getting more and more eye-catching and creative.

We’ve been evolving for years, now, away from the robotic game updates to the enthusiasm-laden fan-like exclamations now more prominent in social. But it’s all part of a greater theme, which is that fans relate to humans, so appealing to those ties and emotions and senses is all further penetrating this space, hitting fans with goosebumps and even tears. Sports lead the way, but stories also serve to transcend, and personality reminds us that we’re fans, they’re players, and we’re all chasing the same goals. 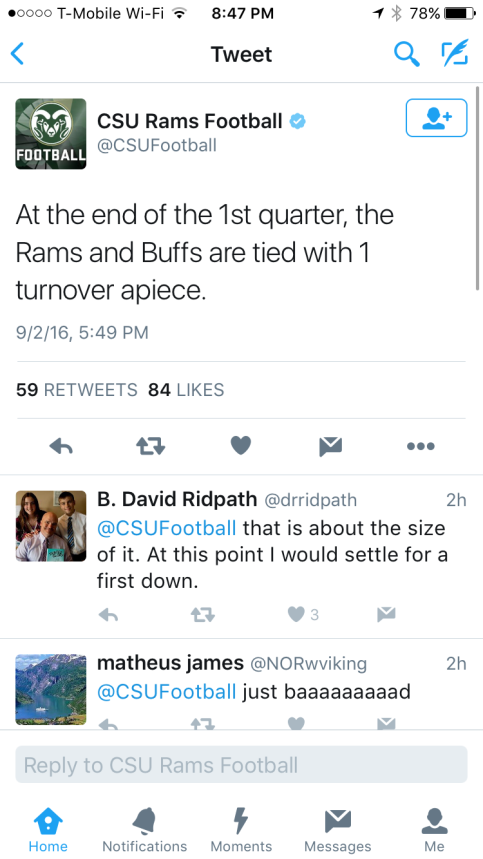 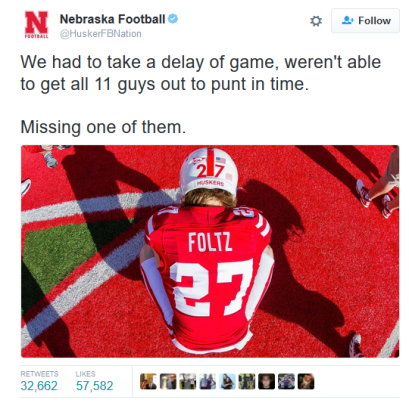 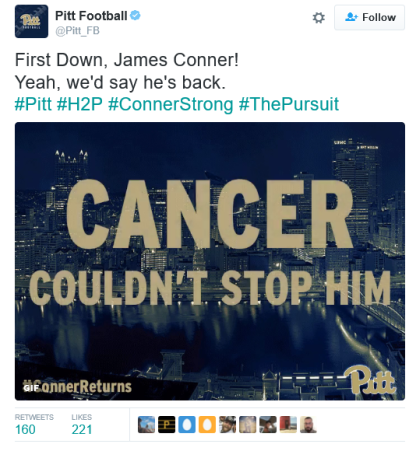 A few different examples here — with Colorado State kind of mocking themselves because they, like their fans, knew that first quarter was NOT what anyone had in mind or had anything worth celebrating. It’s one thing to say one should amplify what the fan community is saying, but when there’s nothing good to say, sometimes a little light-hearted humor can work. Everyone can relate to being upset when a game is not going well, so don’t try to pretend otherwise.

Meanwhile, Nebraska and Pitt celebrated (not just on Twitter), a couple of stories that tugged at our heartstrings. While Saturday was all about football, the digital teams for each school came in prepared to throw gasoline on the fire of emotion surrounding their games, which they knew would include some moments of inspiration and introspection. Nebraska beautifully provided a verbal supplement to the touching way the Huskers football team honored the late punter Sam Foltz. This was bound to go viral as a game highlight, but the way they articulated that in under 140 characters hit hard.
For the University of Pittsburgh, Saturday marked the return of star running back James Conner, who spent last year battling back from cancer, inspiring so many along the way. Their digital team knew the story would resonate and found a way to package in such a snackable, but meaningful way that gave chills to any fans that watched that GIF.

Instagram Stories are still in their relative infancy and teams and media outlets are still trying to figure out how best to utilize the new feature, which can become a Snapchat clone, for some. For others, it’s a stream of Instagram posts, some re-purposed for the main feed and some that just didn’t make the cut for IG, but may be from Twitter or Facebook. But there were a few that impressed yesterday (and in the days leading up), bringing fans something unique, using the ease of uploading creatively produced video, and giving a visual panoply to delight fans tapping through the story. 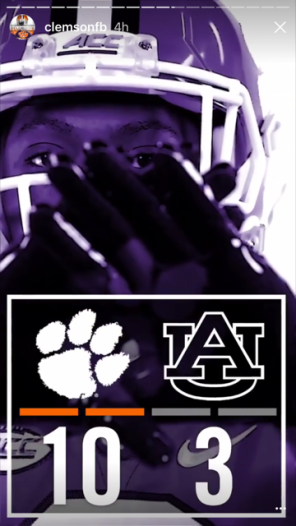 I likely missed 95% of the awesomeness happening on Instagram video, but two that stood out to me as being different from an IG stream or Snapchat story were Clemson and Michigan. We all worship at how Clemson utilizes their incredible array of resources and talent (would just anyone be able to do the same, all things being equal? Easier said than done) and the way they package content for their Instagram Stories is nothing short of incredible (they also re-purpose some for other platforms and the feed). It truly is visual story-telling with that polished level that Instagram was, at least heretofore, known for. (Incredible use of video and narration, too). Michigan also did something unique with the platform, including some great graphics that fit better in a story than a stream and videos using IG’s hyper-lapse effect. I got something on there I wasn’t getting elsewhere.

Snapchat did its thing, still unique and novel 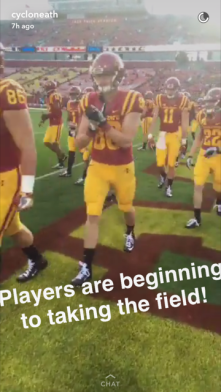 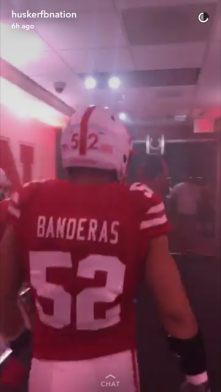 While the Live stories were a bit more fragmented than last year, due to Snapchat’s makeover prioritizing its Discover channels, the content is still unique in its rawness and behind-the-scenes feel and content. Whether it’s a quick look at warm-ups, the locker room before or after the game, fans going nuts in the stands or at a tailgate, and even a fan in the front row getting to meet JJ Watt, this is still content unlike stuff we’re able to digest so easily on other platforms. While I did not see a ton of unique geo-filters at home stadiums, teams are still taking to Snapchat (some doubling up on IG Stories with very similar content) to give fans stories they’re not getting elsewhere. Snapchat’s live curators also differentiate it from other platforms (including Twitter Moments).

What was the Worldwide Leader up to?

I’m always trying to keep track of what ESPN is doing, because the size and forward-thinking mindset of their digital team typically brings out some key themes to watch in sports with each and every season and sport. They kept up throughout the day, sharing updates and video on Twitter and Facebook (but not much native video and not much live video on FB, more on IG), photos and graphics a bit, and activated their Snapchat channel more than ever. So here’s a quick look at their efforts 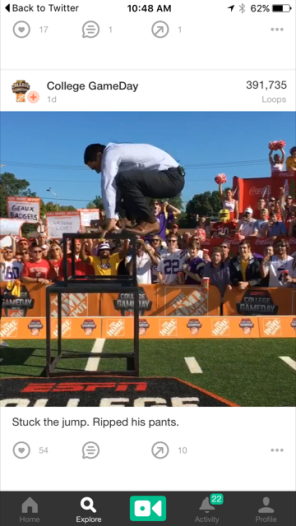 An oft-forgotten platform (except for the NBA) and often just put in the same boat as Twitter (yes, Vine is a separate app), Vine saw some consistent usage from ESPN’s properties, including the samples above from the College GameDay account. Whether using real-time shots or a Vine uploader, Twitter seemed to see a bit more Vines than GIFs and ESPN’s accounts racked up millions of loops on the platform. The questions are if ESPN will find a way to monetize Vine and if they will get creative beyond clips, with music and creative montages and multi-video Vines. 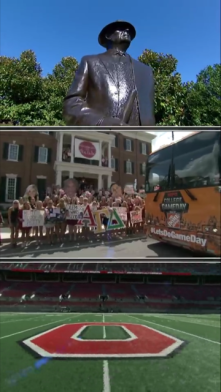 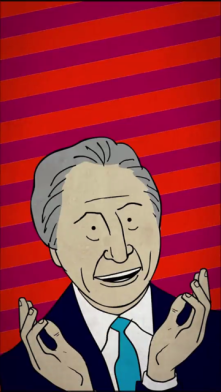 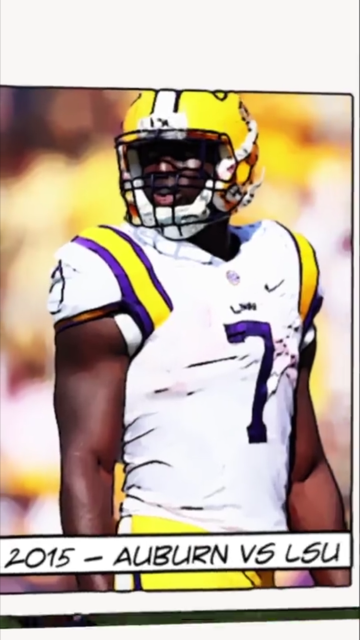 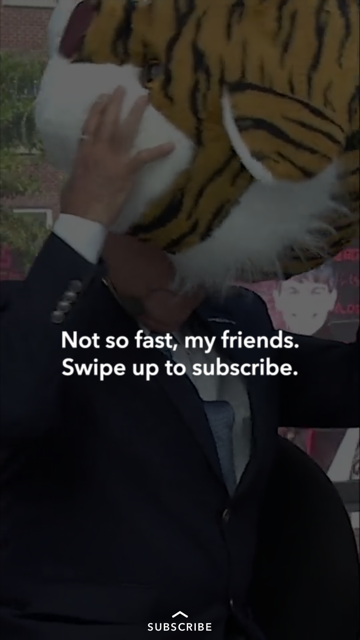 While I mostly just watched some of the College GameDay content on ESPN’s Discover channel, it’s clear ESPN is devoting more than just passing attention to the platform. With Snapchat becoming a primary place for fan engagement on game days, and every day, ESPN basically produced a show, packaging its content specifically for Snapchat. The look and feel felt native and the content was thoughtful and not just filler. The call-to-action at the end included ‘Swipe to subscribe’ and native ads were served throughout, but they felt appropriate (and were easy to tap through, which will remain an issue of concern, for now). Another surprise was, after hearing that Snapchat deep links were coming a while back, all ESPN could do to promote the GameDay channel was to tell their Twitter followers to go to Snapchat and click on the ‘Discover’ tab. Not exactly the most frictionless way to deliver fans from point of promotion to content consumption. 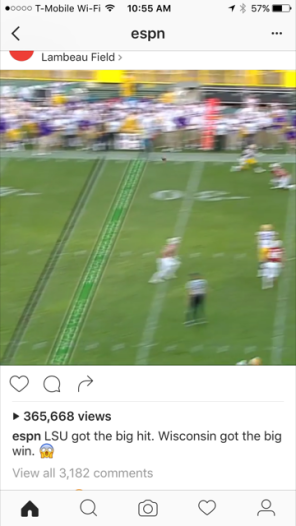 While Facebook and Twitter were more links than native, Instagram served up a ton of native video content from games ESPN owned. And while there was nothing jaw-droppingly unique (but some cool angles stood out from the ‘normal’ highlights), the selection and copy and consistency helped each video garner hundreds of thousands of views. ESPN knows their content is powerful and when they make it a point to serve their Instagram audience, they get results. Definitely keeping an eye on how they utilize IG Stories and if/how they start to more consistently monetize the platform with partners and their other channels (App install promotion?)

The best news to consider coming off this opening Saturday of the college football season? We’re just getting started. Each week is another chance to create, to experiment, to innovate, to surprise and delight. Social media is our classroom and school is always in session.