This past weekend, we witnessed one of the best AFC Championship games ever, which was followed by a still-attractive NFC Championship. This was the weekend Facebook eyed to debut its new real-time sports content social hub – Sports Stadium. Reviews were mixed and, while it is very early in the game, here are 6 observations and insights about Facebook Sports Stadium, and its features.

2. “At The Game” may be the most compelling feature

The first place one lands is the “Matchup” screen, which, once the game is live, has a running, visual play-by-play. The bottom of this page has content, presumably, from fans and media at the game — photos and videos. This may be its best feature as it could rival Snapchat for its more authentic, real-time, really there content. Particularly because many Facebook users may not ever have experienced a Snapchat story. Combine the location-based content, live video, expert curation, and a newer/bigger audience, and you may be on to something.

3. The Stats are Helpful and Sleek 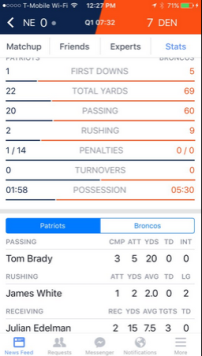 Another nice feature is the easily accessible real-time stats. Twitter’s forthcoming “hub” may have this and several Snapchat snaps are overlaid with game info, but the stats in Sports Stadium are easier to access and have a good mobile look. These stats can likely become increasingly personalized — to fantasy and gambling, but this is a nice start and somewhat of a differentiator for Facebook’s sports central.

4. The Experts tab is a real-time improvement, but cannot equal Twitter

As I periodically flipped to Sports Stadium this tab was the most dynamic, fairly well-updated with at least some fresh content. But it pales in comparison to Twitter and will likely never equal it or the real-time reactions and content, regardless of influencers and live video. Even with Facebook likely exhorting media and teams to post more frequently (some did, some clearly did not), the paradigm on Facebook can’t change overnight. What this feed starts to look like is, well, Facebook. Not the minute-by-minute reactions, news, and content, but more broad updates and content not quite as time-sensitive down to the minute. It’s one thing to get more people posting on Facebook at all during a game, it’s another to have teams and reporters shift their mindset. Perhaps Facebook will allow teams + media to earmark posts just for Sports Stadium. Facebook is trying to be Twitter, here, but they cannot change the way we view and use Facebook overnight, if ever.

5. The Friends Tab Doesn’t Debut With a Flourish For Most

Thank goodness or my friend, Joe, or my Friends feed would’ve been a deserted island, party of one. Not exactly a “Sports Stadium.” If the feed is this empty during games watched by 50 million fans or more, it’ll be tough to convince fans to most more and more often during games on Facebook. The social giant has incredible metrics on engagement around sports events, but it seems much of this before/after and consists more of content consumption than creation. Facebook posts live a lot longer (see paradigm shift point above) and users are not yet, if ever, accustomed or conditioned to do more real-time reaction, in-the-moment posts that make a real-time social hub worthwhile.

6. It May Not Matter

At the end of the day, Facebook is indeed a giant compared to its social media brethren. It has an international reach and daily active user count that blows competition out of the water. Many of these users are NOT active on Twitter, have never seen Snapchat, and maybe check Instagram at times when they’re bored. Many Facebook users — older, international, and even all the Gen Z’ers and Millennials that are not among Twitter’s and Snapchat’s relatively sparse user population. For some, Facebook’s Sports Stadium is the first or the best (to their knowledge) live game hub and real-time center. Facebook has the daily reach, the marketing dollars, and the command of attention, especially on mobile, that gives them a huge advantage in trying to conquer this space. They may not change Twitterati like you and me, but if even a tiny fraction of those 650M fans sample some Sports Stadium content, Facebook may indeed be able to spout a modicum of success. The further integration of Facebook Live, perhaps Instagram (live), international events like the Olympics, and more active promotion will all be worth watching as Sports Stadium continues Facebook’s most recent foray into real-time.

So what about you? Have you checked out Sports Stadium? If you work in or around sports, will you actively post more often in Facebook during games?

As is well accepted by now, Facebook isn’t going anywhere anytime soon. Whether it commands the sports second screen, however, remains to be seen.