On the November 15 episode of Rachel Nichols’s show on CNN, Unguarded, the veteran reporter interviewed NHL Commissioner Gary Bettman, discussing, among other things, federally legalized gambling on pro sports, the NHL’s future participation in the Olympics, and the prospect of putting a club in  Las Vegas. (Watch the full interview) 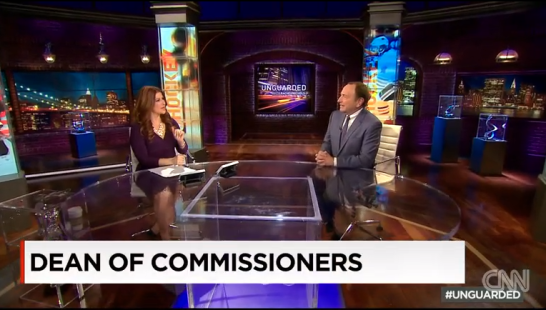 With the recent flurry of activity surrounding daily fantasy leagues DraftKings and Fan Duel partnering with major pro sports leagues, including the NBA and NHL, many see the nationwide legalization of gambling on pro sports as imminent. The issue garnered even more news and attention after NBA Commissioner Adam Silver penned a New York Times op-ed in support of legalizing and regulating betting on pro sports games. Bettman did not come out so forcefully either way, sounding uneasy on the subject.

“Some attention needs to be paid to what sport is going to represent to young people,” said Bettman. He characterized the issue as a dichotomy between championing the spirit of competition versus a focus more on betting lines. The current longest tenured commissioner in major pro sports, Betttam asked rhetorically – “Do you want people rooting for the spread or rooting for their favorite team?”

The subject of gambling was indirectly inserted back into the dialogue again when Bettman was questioned on the future growth of the league and whether that may include a team in Las Vegas. The Commissioner began by reiterating that “The NHL has never been stronger and more popular” and that “Las Vegas is one of (several places) bidding on an expansion team” to enter his league, which is expected to gross over $4 billion in revenue in 2014-15. Delving further, Bettman stated that his hope is for the NHL to “continue to grow the game at all levels; particularly at the grassroots level and internationally.”

While Bettman may have eyes to expand the brand and NHL game internationally, plans for the league’s participation in the Olympic Games are very much uncertain at this point. Among the concerns cited by the Commish included having to stop play in the middle of the NHL season (as was the case in Winter 2014) and the disparity across NHL clubs as to the number of players privileged enough to compete for their country (thereby enduring extra wear and tear NOT helping their NHL clubs, who sign their checks). While Bettman wouldn’t make any definitive statement regarding the Olympics, he did reiterate his (and the NHL’s) support for reviving the World Cup of hockey, last held in 2004 but expected to return in 2016.

The NHL is coming off a banner year in which the Olympics and an exciting postseason captured the attention of the sports world, but, while he can bask in the glow of dollar signs, Commissioner Gary Bettman, like his counterparts with the other pro sports leagues, faces questions moving forward. What happens on the gambling, growth, and Vegas fronts remain to be seen. And, while the other leagues have seen new leadership ascend their respective thrones, Bettman, who has held his title since 1993, is set to lead the way for the NHL this season and beyond.