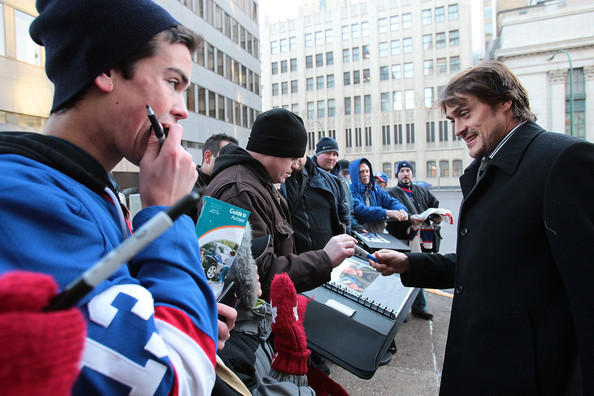 Every sport has its stars that transcend. That make a mark so indelible that they are not just a giant in their sport, but a true cultural icon. Teemu Selanne, legend of the NHL [especially the Anaheim Mighty Ducks/Ducks and so much success for Team Finland in international competition, was one of those. And on Monday, he was inducted into the Hockey Hall of Fame.

I was lucky enough to be around him for a few years. He lit up every room he walked into, was adored by millions, and always had a smile on his face. As I’ve grown with social media and sports and fan engagement, I can’t help but now think about the lessons we can take from Teemu. So, as the sport celebrates Selanne, here are eight things (for #8) about social media and sport I learned and observed from my time around Teemu:

He had so many sayings that all fans and reporters knew, and we all knew when one was coming. It was equal parts relevant, informative, memorable, and shareable. To think about how many interviews the man has given over the years overmatches even what can become a monotony of a long hockey season. The familiarity of what Teemu would say, when, and how made it endearing and connecting for fans. Just like copy or a strong hashtag can help establish a brand, so did fans’ familiarity with Teemu-isms leave us smiling and nodding in approval.

And here’s the thing – a lot of those sayings contain truths that play out in social media. One of the classics was the metaphor of the ‘ketchup bottle’ bursting, that one good thing can lead to an explosion of more success. Or maybe the idea came from his notion that continuing to just believe and work hard and ‘good things will happen.’ Social media success is a marathon, not a sprint. Not every new idea will work, but keep trying and improving, and your ketchup bottle will explode, too. And it’ll be good.
3) He made you feel like you are the most important person in the room and always understood that every fan matters

It’s such a rare trait for a superstar athlete – to be actively present. To look you in the eye when he spoke, being truly engaged, listening and responding. And oh the stories of how, when it came to fans, he just got it. He knew every meeting with an individual fan would become a lifelong memory for those fans. For many, it would become among the most memorable days of their lives. He signed countless autographs, sometimes at odd hours, and made sure every fan was worthy of his attention. The tie to social media should be clear — every individual interaction with the thousands or millions of fans on the platforms can make a lasting memory for that fan, give them a good story to tell, and deepen an emotional bond for life.

Things weren’t always perfect for Teemu. Sports don’t work that way. But it was rare for Selanne not to have a smile or a positive outlook on things. It permeated the room and always made you believe, in the lowest of lows, that something better was about to come. Social media in sports these days can often become self-deprecating in tough times, but when you can look on the bright side, while acknowledging the darker circumstances, it’s a win for everybody. It fuels belief and emotional investment.

5) He made people around him better’

Even when his ice time started to wane down the back nine (or, at least, the last hole or two) of his career, there was no doubt that Selanne’s mere presence on the bench and in the room made everyone around him a better version of themselves. His enthusiasm and work ethic was contagious (yes, he had to be forced to miss optional morning skates). How can someone that sits at the center of fan engagement also make every department a little better — teach them about the fans they’re trying to reach, the content and messaging that works, the feedback from active listening — social media can touch everything. Help everybody around you score their goals.

6) He shined in the big moments

Any fan of the Anaheim Ducks or Finnish hockey can likely recite a handful of times when Teemu scored a clutch goal. It may have taken him over a decade to raise the Stanley Cup for the first time, but a lot of his legacy is still defined by how he played best in the biggest and most important games, tournaments, and environments. So must social media managers shine in the brightest moments. Anticipate them and prepare or them. Have something awesome ready heading into the title game in case of a win, or when the big game comes, or when a record breaking is anticipated. Shine in the big moments.

Hockey in the NHL was pretty different when Selanne scored his rookie record 76 goals for Winnipeg back in the early ’90s. That gave way to the so-called dead puck era of clutching, grabbing, and traps. Then the game opened back up again, forming the combination of speed and physicality it is today, along with goaltenders that are almost literally double the size of those when Selanne first started. But he thrived through it all, excelling in any era. Social media pros don’t need to adapt with the times, yeah? Well, consider that what works and prevails and, heck, even exists, in social media today can drastically change tomorrow. The best, like Teemu, keep their basic skills strong while learning about and adapting to the changes and new elements.
8) Teemu showed emotion

Selanne wore his heart on his sleeve. You could tell he loved the game, could feel when he was frustrated, could absorb his joy in the happy times, and you saw some tears, too (including maybe some watery eyes at the Hockey Hall of Fame ceremony). There’s nothing wrong with emotion and, especially in sports and on social media, it enhances fans’ feelings about the player, in this case, or the team. It’s ok to show emotion on social media; fans can’t fall in love with a robot.

Gosh, I have to pinch myself for just having the privilege of even being in the same room as a damn legend and one whom anyone could be proud for their son or daughter to look up to. He embodied so much good, authenticity, and compassion. We should all hope to be a little more like Teemu and his legacy as a hockey player and a person will shine brightly forever.