The LA Lakers have one of the strongest, most storied teams in professional sports. With a brand that transcends their sport, brand association is no doubt a valuable proposition for corporate partners. While the Lakers have their share of activations on game night, it is clear this partnership association holds the most value, thereby lending credibility to more traditional, less active approaches.

I attended a game on January 31, 2017, and here is a brief look around at marketing, engagement, and sponsorship elements that caught my eye.

Upon arriving at Staples Center, walking through LA Live, one can see Lakers wraps to show that, tonight, Staples (also the home of the LA Clippers, LA Sparks, and LA Kings) is home to the Lakers. Lines to get in through security were slow and long (~ 25 minute wait; issues with ingress is real. Egress would be far easier). Like the wraps, the ‘Team LA’ store is full of Lakers merchandise, while ticket tables are peppered throughout the concourse and the floor and dasherboards are adjusted to Lakers. Notably, Lakers.com was the main digital property promoted, as opposed to any social media, in addition. 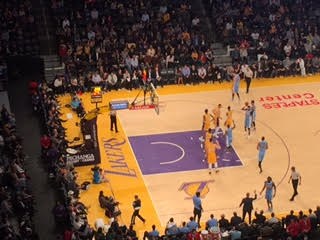 Throughout the game and between game play, the eyes are constantly drawn to the Staples Center video board, and the Lakers content and eye-catching graphics. The Lakers know where much of the attention is going and show their sponsor messages in that line of vision. It’s not a lot of ‘presented by’ elements or integration, but organic content and graphics to attract/earn the attention, while also borrowing some attention for sponsor messaging. 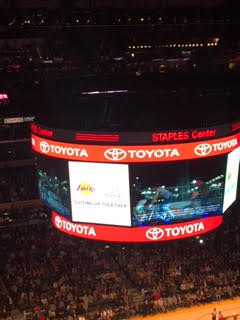 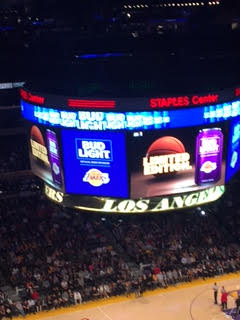 This is not to say there isn’t room for more active sponsorships and more elements that can organically tie in a partner, while providing value for fans. But instead of the Toyota Halftime Highlights, it’s just Halftime Highlights. Similarly with other on-screen elements and fan engagement features like the ‘Bubble Cam,’ Kiss Cam, Dance Cam, and more. 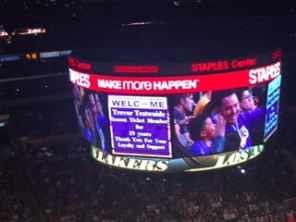 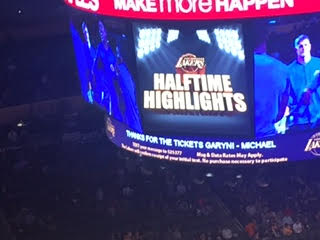 While there were fewer booths and activations of any sort overall at the Lakers game version of Staples Center than the Clippers’s version I attended weeks earlier, there were will some effective sponsor activations around. These were all, notably, on the first floor, whereas the Clippers had some on the upper levels, as well. There was a Verizon-branded activity (shooting for basketball games, changes for hockey games and concerts) that was popular, even during the game. The Los Angeles Times was also giving away t-shirts to market their newspaper subscriptions. 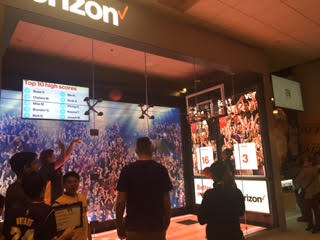 The most memorable and unique activation was the StubHub memento maker. Fans could sign up with name/phone number/email, get their photo taken, and then customize an image to be printed on the spot and shared digitally. A fun and creative way to get some shareable content and a commemorative ticket lanyard to wear it around. An excellent and effective activation. 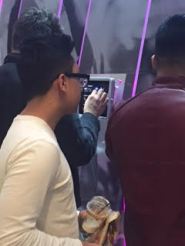 The Lakers also had their own data capture activation, with an enter-to-win VIP tickets to a game/event. These digital sweepstakes are active for every Staples Center event. There were also a few ticket sales tables peppered throughout.

While there were not a lot of directly sponsored elements in-game, there was one late in the game as the Lakers sought to close out their victory. In the fourth quarter, the scoreboard exhorted fans to Make Some Noise. Jack In The Box is a fixture late in Lakers home games, as fans get free tacos if the team holds their opponent under 90 points.

Overall, the Lakers are not overly blatant, nor overly novel or engaging with many of their sponsor activations and in-game entertainment elements. The traditional brand has a handful of major corporate partners and hammers home these relationships with repeat impressions and positioning as true partners, as opposed to just sponsors.