Staples Center is a busy venue. Every Fall and Winter features three teams – the Lakers, Clippers, and Kings – share the arena for their home games, while other events pass through, as well. Standing out can be tough.

I recently attended a Clippers game at Staples Center, a Monday night affair against the Oklahoma City Thunder that was not exactly a full crowd. The Clippers did do a good job of trying to provide experiences, content, and services for their fans, while also integrating partners, where relevant and/or non-intrusive, and doing so that was effective for the partners’ brands. Take a brief look with me below:

Upon entering Staples Center, one walks right into a Toyota, where fans are invited to enter to win the car, a typical data capture activation and certainly a visual that is impossible to miss.

Also prominent inside all the entrances were a few digital screens on which fans could enter to win VIP tickets to some Staples Center event. As you can see, the first question is meant to collect one’s interests, an easy and transparent way to help them deliver better messaging and marketing to you in the future and, in theory, connect it to the same CRM that identifies you as a Clippers game attendee.

With the shared venue, the Clippers had several tables and backdrops to capture fan attention in the concourses. Among other things, they had a table dedicated to promoting their fan app, Club Clippers. Fan apps are beginning to emerge with some teams in the NHL and NBA (the LA Kings have a fan app, too) and MLB has a fan app. This is NOT meant to displace the official team apps, but more focused on ‘fun’ stuff and wanting to be a social network for Clippers fans, instead of news and stats.

The Clippers also had a sign making station, which is fairly common in arenas across the country. 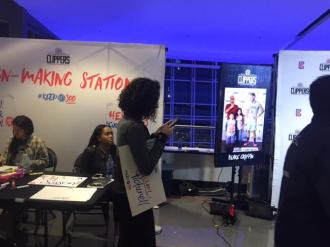 Even before the game started, fans were reminded that Clippers wins mean a deal on Papa John’s Pizza. I swear like 75% of NBA, NFL, and NHL fans get 50% off pizza on days after their team wins. This was the only time it was mentioned during the game, and it was promoted on Clippers social media, as well.

While the crowd wasn’t huge, the Clippers entertainment and game operations did their best to create a visually exciting atmosphere with lighting and throbbing music. 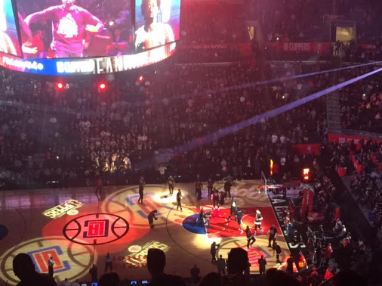 Draft Kings may not be as ubiquitous on TV broadcasts as they once were, but the daily fantasy giant still has partnerships with many pro teams, including the LA Clippers. Draft Kings was featured and activated in an endemic, relevant manner, including the ‘Draft Kings Starting Lineup,’ as well as a Draft Kings fantasy lounge/bar fans could frequent to watch other games and catch up on fantasy performances.

The Clippers had several replay sponsors, an easy way to get a brand logo in front of eyeballs, as all the fans’ gaze turns toward the scoreboard to check out an instant replay of a suck play. Arco was featured more consistently and frequently, a way to ‘pump up’ the crowd. 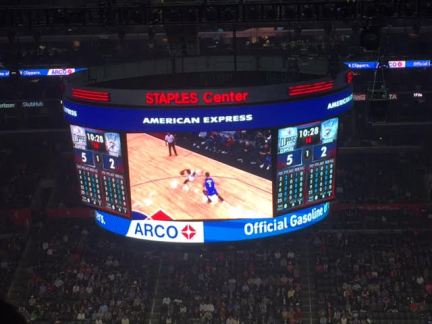 With all the LED and video board mentions of the Toshiba ‘Hologram Station,’ I simply had to check it out. While calling it a ‘hologram’ was a bit of hyperbole, the station offered fans the opportunity to get a picture or video with their favorite player, with the LA Clippers backdrop behind them. Fans, especially kids, very much enjoyed it, especially the way they could see themselves next to an animated player on the screen, Hall of Presidents style (yeah, I made a Disney World reference).

Next to the Hologram Station was another sponsored, AR (green screen) activation was a fun ‘Posterize Me’ promotion. Another great way to collect fan data and give them the opportunity to make memories to share and preserve <– The is major key. 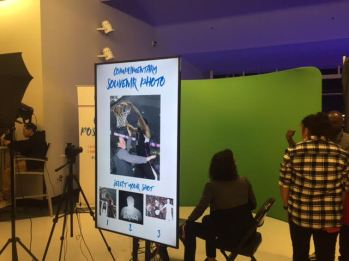 The Clippers had a couple of airlines – American Airlines and Delta – integrated into the game presentation. Certainly interesting to consider the different ways the brands were showcased and how the partners value the means and the value. American was featured in a ‘Taking Flight’ fact about a rising player (does every branded ___ start with a play on words? Ha) and Delta was a sponsor of the Spirit team. 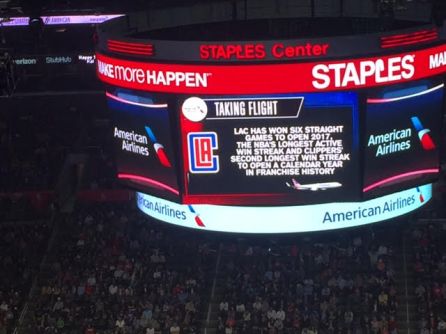 City National Bank had a strong presence all night at the LA Clippers game, at which they were sponsoring a Clippers coin bank giveaway to fans in attendance. The bank also had a presence in the game presentation, including a simple Hi-Lo fan contest, in which a fan guessed whether a player’s stat line was higher or lower than the number given (it was easy). The second Hi-Lo question, however, was not Clippers or basketball-related, but related to finance, to tie it back to City National. It seemed a bit out of place, but it certainly reinforced who was behind this contest and what they do. Later, gifts tied up were “parachuted” from the rafters, to fall into the waiting hands of lucky fans. 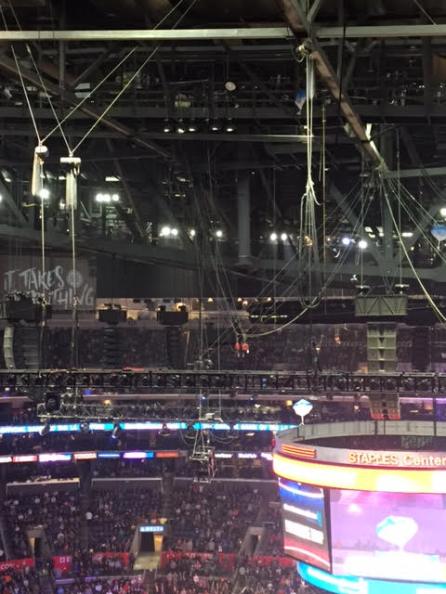 Most pro sports teams nowadays have fan social media posts aggregated, typically using Tagboard to aggregate, filter, and display on the video board. But not all have a salient sponsorship, as the Clippers did with Car Max. Nothing too relevant about this activation, but an easy way to take advantage of eyeballs going to the screen to make sure fans know of the partnership. 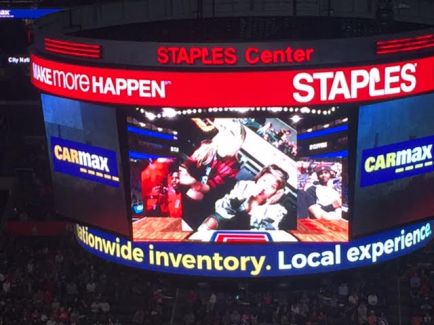 Nothing special here, I just found it interesting that, for both in-arena hosts, their personal Instagram profile was listed under their name, as opposed to their Twitter handle. Also notable was that, unlike their NBA roommates, the Lakers, the Clippers did not have their Twitter handle spelled out on the floor.

Kia is all over the place as an NBA partner and the car brand was all part of some branded entertainment during the game, delivering both the Sounds of the First Half audio (helping to bring what fans are accustomed to seeing on TV broadcasts), as well as the Kia Noise Meter, in which a meter that looks like a car speedometer ratcheted up as the crowd got louder (ok, so it wasn’t that loud).

One of the most fun activations came during a media timeout late in the game with an on-court contest in which furniture company Jerome’s Furniture provided motorized recliner chairs for a race between fans, that culminated with a having to shoot and score while reclined in the chair. A great way to take a fun contest, while also activating the brand and their product for fans watching. 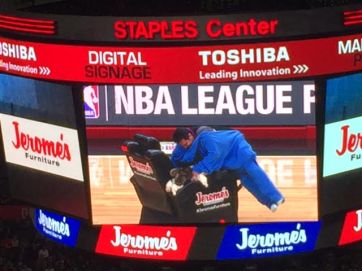 While walking around the concourse, I caught a glimpse of several tablets provided by Stubhub, presumably to allow fans to peruse and purchase while they were at the game. It’s certainly interesting to see Staples Center (these looked like permanent installs, not just rolled out for the Clippers game; though they could be turned off, as they were late in the game this night) facilitate the secondary, just steps away from the official arena box office and ticket sales tables throughout the arena. 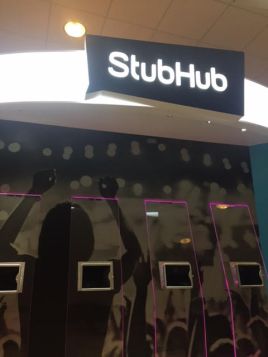 Chick-Fil-A is a heavy sponsor of many pro sports, and they love the word play of foul / fowl. At Clippers games, when an opponent misses two straight free throws in the fourth quarter, fans can take a coupon handed out at the with to Chick-Fil-A for a free chicken sandwich. (There has to be a mobile/digital way to do this, one thinks, fans don’t have to hold on to a piece of paper). I am starting to see this activation (two straight opposing team missed FT’s late in the game) quite frequently in college and pro basketball, and is a great way to keep fans engaged until the end, especially for those interminable free throws that are inevitable in the waning minute or two of a close loss. 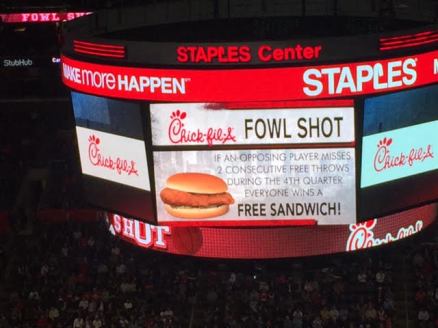 When the final score alert went out (to all fans that had the LA Clippers app installed, presumably, as opposed to just those inside the arena), it included a CTA to book an uber for a safe ride home. Clicking on the alert opened the Clippers app, which then asked to open the Uber app. While not the most seamless experience and surprisingly no first-time rider promo code [though hard to execute in this work flow], a timely and relevant time to integrate Uber, of course. 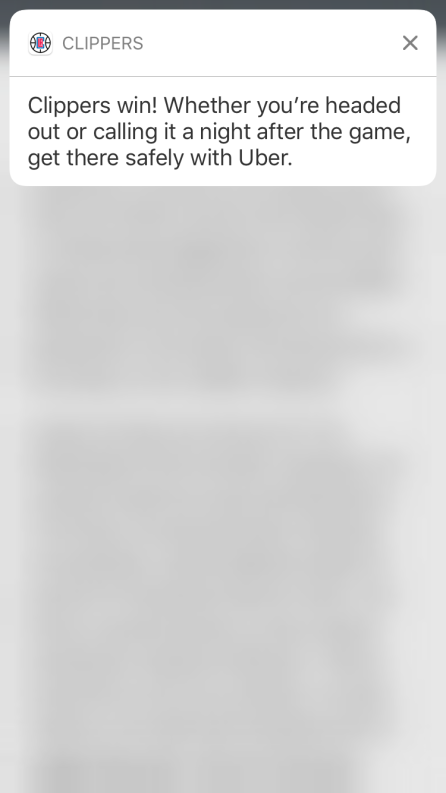 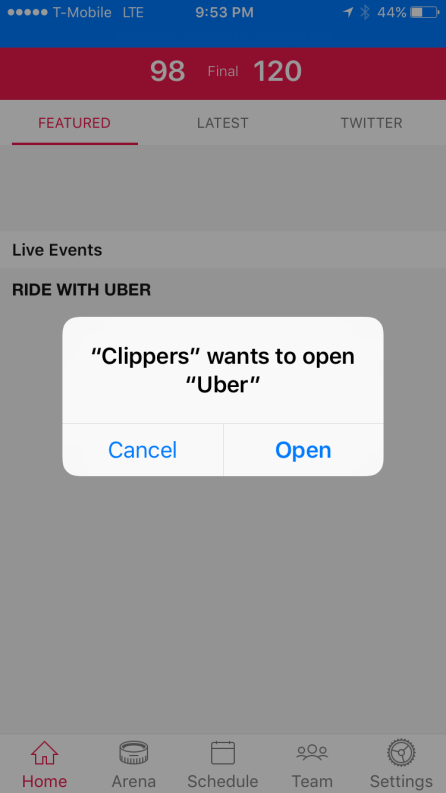 Lastly, a quick look at the collection of Snapchat geofilters available during the game at the arena. Besides some of the banners hanging from the rafters, this was really the only presence of the Clippers’ co-tenants in Staples Center and worth the investment of those teams to pay for those filters to be up, even on nights when a different team is hosting thousands of fans in the arena. 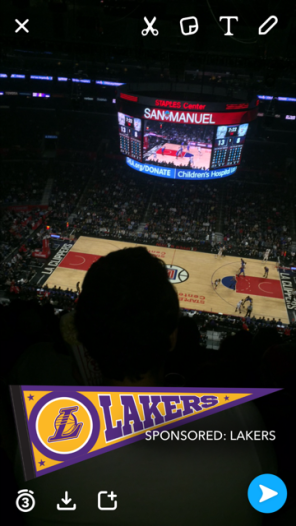 Once you work in sports business, experiencing a game is never the same. The fan engagement activations, the sponsor integrations, the data capture and marketing efforts,