It’s not easy to stand out in Los Angeles. Between the celebrities, the traffic, and pro teams in the NBA, MLB, NHL, and, now, NFL, there’s no shortage of competition for attention.

So how can LA’s Major League Soccer team the LA Galaxy (soon to be joined by LAFC) capture fan attention? They can be first.

That was one of the themes of Galaxy President Chris Klein’s remarks in introducing the Galaxy’s new virtual reality series for fans, produced with Laduma. VR was their opportunity to be first, and Klein was confident that the project would capture the attention of the right people in the right way.

Klein pulled his phone from his coat pocket, emphasizing how the young fans they seek to reach are tethered to their mobile devices, thirsty for snacks of access to the sport and players they love. Beyond simply the young, tech-savvy demographic of fans, Klein emphasized his conviction that the Galaxy’s VR series would capture the attention of new fans, help the stories of their players truly come alive and affect fans, and drive conversations about the experience. In a city like Los Angeles, the ability to enter into the awareness and casual conversations of fans is invaluable.

After Klein and Laduma CEO Ben Smith addressed the gathered media, we had a chance to try on some Laduma-branded VR headsets (the Galaxy plan to sell a corporate partner on the VR content campaign) and check out the series. Countless shoots from tons of angles, followed by stitching together all the feed and perspectives ends up in an immersive, truly 360-degree, in-your-face environment.

Before I slipped on a headset, I enjoyed seeing the excitement and expression from others. The entry into a VR world can be truly stunning and the depth of that created for the Galaxy and level of production caused some enthusiastic exclamations. 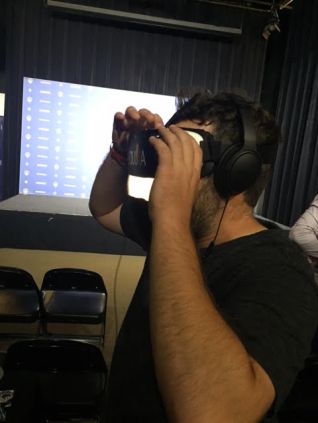 First, I think these produced, made-for-consumption VR series is the best use of the technology for sports fan engagement, at least in the short-term. Even the best VR experience cannot recreate the experience of being at a game amongst friends (and beer), but VR can transport one into places and views they never thought possible.

You’re at practice in the circle while the players juggle the ball around, you’re next to Steven Gerrard as he’s talking about LA experience, you’re in the locker room alongside the players, and walking out in the tunnel with them, with the sound and view of passionate fans screaming in your face.

And then the most magical thing of all happens.

They look at you. For a fleeting moment in each of the videos I watched, eye contact, once from a player, once from a fan incited a feeling difficult to describe. It’s a sensation of sentience, when it’s not just a video you’re watching, but a world you’re in. That’s the epiphany for driving emotional fan attachments.

It’s really cool to be behind the goal when a goal is scored and a celebration ensues inches from your face or next to the line of players participating in a practice drill, but it’s that (perception of) reciprocation of awareness and feeling of immersion that makes me think this novelty of VR may indeed be worth it for the Galaxy. Not just as a corporate partner activation tool, but as a fan engagement tool, and one that’ll have them talking and feeling long after the headset is removed.