We’ve all seen it. For years, fans would throw their TV remote or post on obscure message boards, venting after a tough loss or questionable call with their favorite team. Social media has only facilitated and augmented such sentiment. Some teams fear the venting and the vitriol.

But, the truth is, a profanity-laced tirade is far better than the eerie sound of silence.

This has been a theme in social media and sports and was well-articulated in my recent conversation with Julian Valentin, who in over five years working in digital, publications, and social for the Colorado Rockies, has often seen an incensed fan base, struggling to see the Rockies fail to make a playoff run in recent years.

Valentin doesn’t seek to put the fire, out, however. He stokes the flames.

“The worst thing you can have in sports is apathy (among fans),” said Valentin. “To combat that, there have honestly been times where I’ve specifically chosen language where I know it will…get a rise out of (fans).” 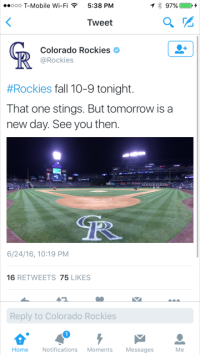 It’s not about trolling fans, it’s tapping into their emotion, to keep their passion lit.

Notice also the subtle language Valentin uses to keep the mindset optimistic and forward-thinking. He articulated beautifully how, after tough losses, he’ll post a pretty pic the next morning of the sun rising over the stadium, signaling the start of a new day, a chance to win one of 162 games played in the long MLB season. But even if it’s another loss, there’s little doubt the Rockies will have a notable play to celebrate.

It’s why, win-or-lose, Valentin makes sure to celebrate the great plays, noting how All-Star third baseman Nolan Arrenado is a particularly good source of sweet stops and stellar swings to post about when the score leaves a bit to be desired. Keep feeding fans and they won’t go silent easily.

I can personally remember suffering through a league lockout, when any piece of social media content (yes, even feel-good CR stories or donations) elicited profane responses and exclamations about greed and other stuff that obviously the social media team was causing (ha!). But I welcomed it. Because it means the fans cared.

Don’t retreat in the face of adversity or defeat. Don’t post a final score and go silent. Embrace the other side of emotion and make sure fans feel that intense sadness, so that they invest themselves even more in seeing the team’s success.

For social media and sports, there is nothing scarier than silence. A vocal fan base endures, whether they’re jeering during the tough times or cheering a championship. Don’t let that fire go out. Don’t let the sparks go silent.