It was all about visuals one year. Then video and mobile. Stickers and filters, which were first popular with Line and WeChat, are all the rage now. Other words that can reasonably fill the blank in 2016 in social media and sports will be the year of _____, include real-time, community, location, user-generated content, messaging, and influencers.

And, upon close inspection, several social networks are all beginning to converge around the same features and themes as networks seek to capture attention, engagement, and, ultimately, advertising dollars and consumer data. It’s not about adopting and mastering one emerging trend after another. There are certain underlying principles guiding innovation and the convergence of all these competing social platforms. Here are a few that can inform a solid strategy in fan engagement in social media and sports:

At the end of the day, it’s not so much that social networks are running out of ideas and just copying each other. It’s learning more about how fans want to communicate and how they want to consume and create content. But, as quickly as the mediums and platforms change and evolve, the principles remain firmly entrenched, no matter the social network. Create community. Help tell and create stories. Be present. Amplify. We may not be able to predict the next flavor of the week feature or network, but rest assured a good story will remain a good story.

An example from the Buffalo Sabres that helped fuel this post: 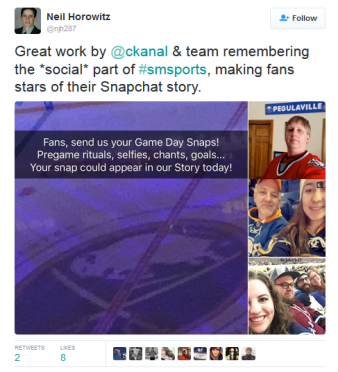