On Tuesday, June 16, the West Michigan Whitecaps, a minor league baseball team in the Midwest League and Single-A affiliate of the Detroit Tigers, hosted their first-ever “Minions Night,” an homage to all things related to the Minions and their movie. Led by Promotions Manager Matt Hoffman and Fan Engagement and Social Media Coordinator Jason Brower, the Whitecaps went all out, doing a tremendous job integrating The Minions into the team’s game presentation, promotions that night, in-venue activities, and even the club’s social media account went “Minionese” for the night.

Brower and the Whitecaps consistently do a tremendous job to engage their fans, and the various segments of which they’re comprised, providing memorable experiences and pure fun to fans, a staple of minor league baseball. You can hear Brower talk about the Whitecaps’ strategies and promotional tactics on a recent podcast here. The Q&A below is a special feature for DSMSports, in which Brower was gracious enough to answer a few questions about Minions Night, its genesis, execution, success, and more. Read on and learn about this unique promotional night that went off fantastically and even had some Minionese running through Twitter. The goods —

Tell me about how the Minions Night idea came about. Did the idea come first or the objectives it was seeking to accomplish?

The idea came first. It was one of those off-season ideas that just come about. Also, the new Minion movie was coming out this summer so we thought it would be a great tie in.

How much did you and the marketing team know about Minions before Minions Night? How did you ‘do your homework’ to make sure you knew all about it, but also kept it relatable for fans that had never heard of Minions or were less informed?

There was a few of us that had seen both of the Despicable Me movies, so we were well informed but our Promotions Manager, Matt Hoffman, had not seen the movies so he did a bunch of research just looking at clips and asking other folks what they enjoyed most about the movies and try to integrate that into the promotions throughout the night.
Twitter was where you guys really brought in Minions culture and language. What was the thought and strategy behind speaking Minion on Twitter and how was the fan feedback about it?

The thought just came a couple weeks before the event when we were trying to nail down all of the details of the night and someone mentioned [the idea of having] Minions take over our Twitter account. Everyone thought it was a great idea, so I did some research on a Minion translator. Also, with something like this to have to go all in no matter what to get the full effect. So every tweet during the entire day I put in the translator and it spit out Minionese. 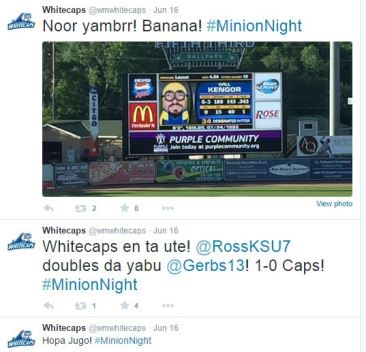 Talk about the ways Minions Night took over the game presentation and Fifth Third Ballpark for the June 16 game.

Was Minion Night a success and is it worth all the time, effort, and resources to blow out just a single game? How do you try to get more value out of it than just single game sales?

Minion Night was definitely a success when you see all of the kids wearing their Minion hats and enjoying the Minion characters. We had a great crowd but maybe more importantly with theme nights like these is that we created memories. That is the value that we gain from a night this, kids and families will have these lasting memories of their night at Minion Night and hopefully come back for the next fun night we have because they enjoyed themselves so much.

What was your favorite part of Minions Night?

Personally my favorite part of the night was Minions taking over our twitter account. It was difficult trying to tweet as a Minion but it was fun seeing the fans reaction. Received lots of positive response.

What was your biggest lesson from Minions Night?

When you do a night like this you have to go all in. Everything from the giveaway, to the on-field entertainment, to the social media activation, it all has to have the same theme and [then] fans will appreciate it and show their support.

Which movie would you want to integrate into a Whitecaps game next?

We would have loved to do a Jurassic Park night this season but just ran out of time and resources. It would have been great to get some dinosaurs out at the ballpark. We’ll have to look at next year releases and see what will be the next big night!

Thanks so much to Jason Brower for sharing some great info about the Whitecaps’ Minion Night. For more, tweet @JABrow to hit up Jason, check out the #MinionNight hash tag on Twitter, or comment on this article!