Big picture thinking. Thinking about not just what’s next, but why it’s next. Taking the time to think beyond going through the motions and transactions.

At the annual Leaders Sport Summit, these were among the themes and traits, backed up by insights, by stats, by where their own leagues, sports, and teams and organizations are going. Below are some of the themes that stood out at the event where leaders from sports leagues, teams, and related businesses spoke; along with facts, quotes, and stats shared at the event via #Leaders17. This is Part 1 of 2. [See Part 2] 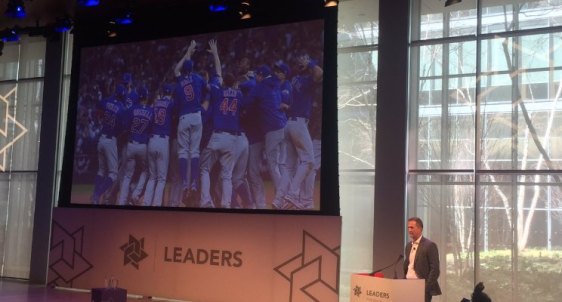 How Sports are Upholding Models, while the Models are Changing

One of the panels opened with the notion that the reason sports is thriving across media platforms is because it is content that is made for multi-platform consumption – the best available screen. As is often stated, too, it among the last bastions of content that must be consumed live, another factor behind multi-platform engagement. All this results in making necessary unique partnerships, such as Turner and CBS teaming up to maximize revenue from rights to NCAA March Madness games, selling ads across platforms and cross-promoting each other. The multi-device platforms also enhances sponsor activations.

The metrics can’t keep up, either. Nielsen is trying, but it was lamented that their cross-platform measurement isn’t there yet.

Executives from Turner were there, talking about the auspicious results of their eLeague, an eSports league they’ve invested in and gotten fully behind for linear and digital programming. With 50 million esports players in the US, which was a stat dropped, Turner had high hopes and they have been exceeded. Ratings, they said, are matching those of regular season games in the NHL, MLB, and MLS. Turner sees it as a way to reach younger, more digitally savvy audience. In fact, 90% of eLeague consumption is happening via digital, with just 10% on TV. Live events are growing quickly in esports, as well as other leagues. Turner will have even more company in the space soon.

There were a couple speakers from Dow Chemical and AT&T, two bug business that are very active in sports sponsorship. They offered some excellent high-level insights, offering a better understanding of the keys to successful partnerships. Joe Harlan of Dow Chemical put it succinctly: “You need partnerships, not transactions. That means you’re in it for reach other.”

Harlan continued on how teams can approach their partners; it’s about finding the mutual benefit point, the intersection of interests. “Focus on what you do and what you deliver. Then the conversation is about relevance, not price.” For example, they worked with PGA Tour to reach business execs, who are among the golf demo, and also had great success leveraging opportunities to test technologies as a NASCAR partner.

Along with recognizing the value of the brand – fit and what it adds to the other brand — the point was made to USE the access partners are granted within sports, as sponsors. This simple, but succinct point is oft-overlooked.

Why and What with Sports?

There was additional insight shared on sponsorship and how and why to activate it. Citi’s Tina Davis noted the importance of sports providing a ‘live audience at scale,’ while AT&T’s Ryan Luckey pointed how sports partnerships rally the organization itself. The way these sponsorships are being put into practice have undergone immense change.

AT&T, Luckey said, doesn’t think of themselves as a phone company, as in decades past. They are a video/content company, with Luckey noting that 60% of AT&T’s traffic is video. Further, as it pertains to sports sponsorships, Luckey emphasized the now seemingly obvious point that, with only 5% of fans actually attending games, on-site activation is not nearly sufficient.

Twitter COO Anthony Noto gave an enlightening look into Twitter’s past, present, and future with sports. The NFL content seemed to be a perfect fit when they noticed the huge spikes in Twitter activity, affected by NFL games and topics. Marrying conversations seemed logical. The results were promising, with Noto making note of deeper data, like the fact that 30% of the Thursday Night Football audience was from outside the US and exhibited higher female viewership than traditional TV.

But Twitter has ambitions to make hay with “under-served fans,” citing investments in sports like darts and lacrosse. (200,000 fans followed/viewed Darts competitions apparently). Unlike linear TV, Twitter has “unlimited shelf space,” they boasted. Twitter is also looking to their international audience, specifically noting sports fans in the UK and Japan, as places of interest at the moment.

In Q4 2016 alone, Twitter had over 600 hours of live content, and 55% of it was sports. Twitter is not out to challenge linear TV when it comes to mainstream sports streams, like TNF, either. “We are very happy with bringing an incremental audience,” said Noto. “There is a younger audience that doesn’t want to pay for TV. We can serve that audience.”

How will Twitter monetize all this content? Noto said they’re considering all economic models, including charging for live content. But there was no clear indication of any immediate plans.