Social networks have truly transcended international borders. Fans all around the world can consume the same content and connect around their favorite athletes and teams.

But the social media and sports objectives may not all be identical, the same principles and strategies tend to prevail. I had recently had the privilege of interviewing Casper Vestereng, who runs social media for TV3 SPORT, Denmark’s biggest sports TV network, which dominates markets all over Scandinavia. (Listen here) He has spent several years in social, studying it and strategizing with it to deliver results.

For Vestereng, it starts with a keen understanding of the platforms, how they work, and how they can, ultimately, drive return on objectives. And that requires understanding that, on Facebook where TV3 SPORT most focuses its social media efforts, getting fans to want your content is key.

“My view on this is that you can drive the results…but you have to do it on the premises of how this platform works…,” said Vestereng.

“For driving a lot of traffic from Facebook, you need to put some engaging stuff [out] there, because that’s the nature of Facebook…

[Casper mentions The Sports Bible as an example of a Page that has a good combination] – “Every time they put out [a native and] engaging post, they put out three linked posts, which get a lot lower reach, probably, but that’s what gets them money. We do it kind of the same way. A lot of linked posts out, but we also do a lot of fun stuff. We try to give a little of it away [to] try to keep fans happy.”

Vestereng appreciates that there is a certain type of content made for social and there is content TV3 SPORT knows fans can go to their site to consume. Vestereng understands the objective for each and every post, and builds a strategy, ratio, and content mix that maximizes website traffic (their most important KPI). And that doesn’t include outbound links for every post. 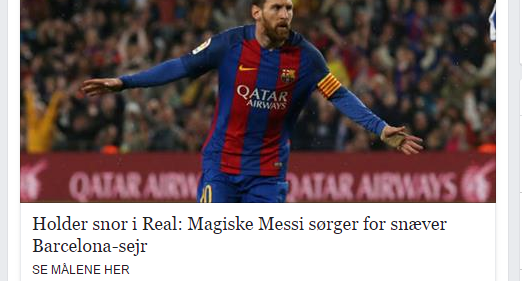 Organization buy-in has evolved under Vestereng’s stewardship – by appealing to the metrics. When TV ratings continue to fall (though they remain massive, compared to digital viewers of live sport), the reality becomes more clear that these eyeballs aren’t disappearing, they’re just consuming more on digital and social. And with digital leading to dollars, the buy-in becomes easier and easier to achieve.

“In reality, the number of television viewers is not growing on all sports, so all of the TV guys are under a lot of pressure, and now we monetize a lot of the content we put on digital. So now our bosses are all great on pushing the TV people to do digital stuff…I only see it getting better and better,” Vestereng described.

It can get even trickier when TV3 SPORT is showing a live match or race on their TV network. Driving viewership is still goal number one, but, in a process and understanding that has evolved for the network, they aren’t kidding themselves – fans are and will continue to be looking at a second screen while watching or following the game. That’s an important opportunity for TV3 SPORT, not an obstacle, Vestereng has led the network to believe.

He added this paramount point about owning conversation: “If we didn’t do (social media content), just because we had (and event) on TV, we’d lose a lot of engagement there [and] we’d lose a lot of control over the discussion [around the event]…”

TV3 SPORT is ultimately out to be the source for content, for conversation, for everything around sports for Danish fans. The numbers show they’re winning that battle, said Vestereng, with social media becoming a key tactic and referral source, if not yet a mainstream content consumption source for TV3 SPORT’s fans. The credibility, reach, and traffic they’ve developed has allowed the Danish sports media powerhouse to train fans to consistently sit through lengthy pre-rolls to access the desired content.

“When we put out something that we want to go viral [for social media], it needs to be very good. (But) we can’t monetize viral stuff. We need traffic,” said Vestereng. “We have maybe the longest pre-roll (ad) strategy in the world. I haven’t ever seen a website with one minute pre-rolls that you can’t get skip. We have that before every goal that we show, every highlight we show on our website.”

While Vestereng admitted the, well, ball-sy nature of 60-second pre-rolls for their content, he points to increasing metrics and they key lying with consistency. Fans know to expect the pre-rolls prior to the content, and that unchanged practice over the years have given them an advantage.

“I’m not sure it’s the right way to do it, Vestereng stated. “It’s not my strategy. [But noting video starts are up more than ever] We’re still growing…We’ve done (the one-minute pre-roll) for years now. People know (to expect it)…So people are accepting of it…And I think a lot of other media are actually looking at it and [saying] publicly ‘the commercials are so annoying…’ but in their strategy meetings are (jealous)…”

Vestereng has spent a lot of time learning the game (and continuing to learn the game) behind social media and sport. While the languages we speak, the goals we measure, the sports we watch, and the strategies we use may differ with diverse cultures and countries, it all comes back to content and community. Fans connect, and connect around the content (games, matches, athletes, features) that makes them fans in the first place. Whether it’s Denmark or the US or anywhere in-between, sports drives passionate, engaged fan bases, with an unquenching thirst for content. And there’s always a platform to deliver it.