There was a beautiful, simple gesture recently taken by the Philadelphia Phillies with a fan that reached out on Twitter. It underscored the power of social media, the power of active listening and engagement, and how in a fleeting moment on an ordinary day, a team can leave a permanent imprint on a fan, and all the fans to whom their story emanates.

Every game, every day is an opportunity to give a fan a lifelong memory. A story they’ll tell not just that day, but the best memories can be so special to become part of the, well, story repertoire for a fan. One of their favorites to tell when making conversation, meeting new people, and reminiscing. When was the last time you left such an impression on a fan, giving them a memory to preserve and story to tell forever. 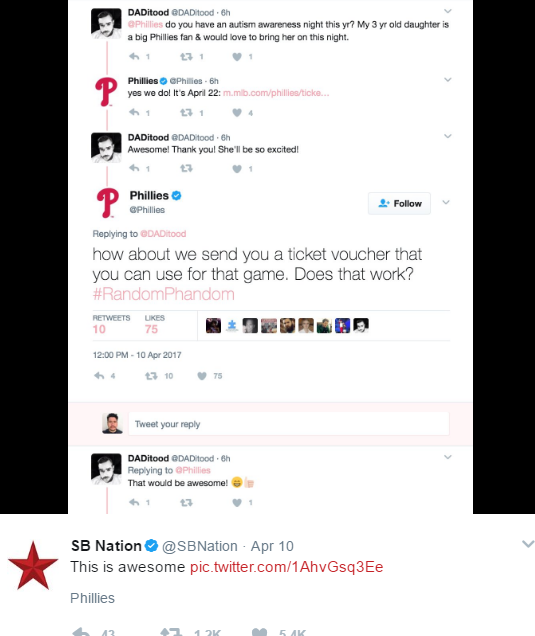 A story that sticks with me because it reinforces this message? It starts with active listening, a little surprise and delight, and a fan with a memory they’ll cling to forever.

A quick retelling — I was always actively listening on the team’s social media platforms, with mentions, key words, and lists. One game night, I noticed a fan excitedly posting about being at the game with his dad for his dad’s birthday — their first game ever for them both. On a whim I reached out to the fan, got their seat location, and about a third of the way through the game, went and surprised them with some autographed swag to make sure this would be a birthday they’d never forget. (A smartphone pic they requested assured it).

Seeing the smiles on their faces didn’t leave me. The power of a single engagement blew me away. These two would retell this story and hold on to this memory forever. How cool is that? That’s immeasurable ROI.

From that day forward, I realized if I could have at least one of those powerful, one-to-one engagements (not necessarily as grandiose, just making a fan feel like the team cares about them, as an individual, and appreciates their personal support and investment); if I could inspire that feeling in just one every day, the super fan base would grow. The brand ambassadors. The emotionally connected fans. The ones with a story to tell.