It’s the best of the times and the worst of times. That (slightly altered) timeless Charles Dickens line can serve to describe the state of professional sports where revenues and team valuations are soaring while leagues face the realities of mistakes made (and magnified in media) by their players (and owners). This was among the concerns addressed by NBA Commissioner Adam Silver in a recent interview he did with ESPN’s Andy Katz. Here a few snippets from that interview. Listen to the full interview here.

On several NBA players, notably Derrick Rose and Lebron James, wearing “I Can’t Breathe” shirts during warmups to raise awareness of the issues surrounding the recent killing of Eric Garner:

Silver: Putting aside the precise platform in which they speak out – wearing a t-shirt is not my preference – I’m very supportive of the fact that players are speaking out about the issues they care about. I think the public should see that these are not just one-dimensional players on the court. They live in communities, they have opinions, they’re directly affected by many of these issues, so I’m proud of them for speaking out.

I think there are many ways in which they can speak out. Most of our players are extraordinarily active in social media, for example…or they’re using their media appearances in pregame and postgame press conferences. 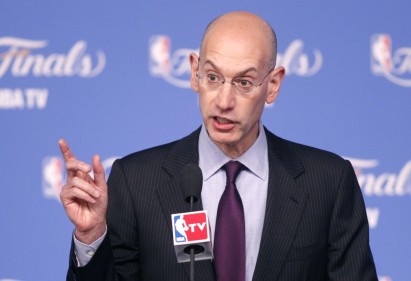 My preference is that they not become billboards during our games for their political standpoints. But I also understood in this circumstance it was unique and I stood down, in essence, and allowed it to happen.

Silver: (It is) something we’re continuing to look at…We’re studying the NFL personal conduct policy. We have standards in place now. We have standards for players that commit violent acts. We have dealt with domestic violence issues in the past and recently, as well. So I’m on the fence a little bit on whether we want a policy that so precisely lays out penalties for issues without dealing with the complexity behind them. I think sometimes judgment is critically important and, remember, we’re different than the NFL. Our players have the right to appeal off-court discipline to a neutral arbitrator, so there is a check in place, already, for our players.

On the role of player discipline for the commissioner and a neutral arbitrator:

Silver: I think it is critically important that someone, in this case me as the commissioner, be in the position to act quickly and to represent the interests of everyone involved in the league. At the same time, I accept that there should be a due process check on behalf of the players and, putting myself in the shoes of the players or their union, I’m comfortable with the fact that they have the right to go to a neutral third party and, if the view is I was unfairly swayed by public opinion, for example…that ultimately turned out to be not fair to the player, that’s the job of that neutral third-party to come in and say he overdid it in this case.

We all have to be on notice that we are public figures, we can be scrutinized, we will be scrutinized for things we do. But also, if people make mistakes, there will be a penalty for it. It doesn’t necessarily mean you should lose your job if you make one mistake. I think that’s where the judgment comes in. Those (cases) are very fact-specific and I think we have to look at each case individually.

On consideration of changes to the league schedule:

Silver: My sense is that if we can shorten the preseason a little bit, begin the regular season a little bit earlier, push the finals a little bit later in June; we can reduce the amount of back-to-backs, reduce the number of three games in four days, etc…My sense is that would be better for our players. Not only will it reduce injuries, but would keep them sharper for the games and, ultimately, (that will result in putting) the best product on the floor.

On whether there is an issue in the NBA with teams ‘tanking:’

Silver: I absolutely don’t think any team is trying to lose. I talk directly to the players. Our players are (too) competitive. No player is going out there to lose.

In terms of management, I think there is an absolute legitimate rebuilding process that goes on among our teams. I think what has happened in the case of Philadelphia (is) their strategy has been reduced into a tweet. This notion that ‘be bad to be good’ and, I think, when you sit down with (Sixers GM) Sam Hinkie, when they lay out the strategy, when you hear about other avenues they’ve tried; it’s not clear exactly what their alternatives were.

So, I would just say that I would only encourage people to really get into the complexity of the situation, and, when it gets reduced into a headline, I understand the reaction.

On the New York Times op-ed he wrote in favor of legalized, regulated sports gambling:

Silver: I wrote that column to try and break the ice a little bit…My point was there is massive sports betting going on in this country…And my view is, if it’s gonna go on, let’s make it transparent. Let’s bring it into the sunlight and let’s regulate it the same way we do other industries.

There is a federal law right now, which only allows sports gambling in very unique circumstances…my view is…let’s come up with a framework that, presumably, would allow states to opt in. Because I think there also needs to be consistency from state to state, especially in a day in age when so much of the betting happens online…Most people, at the end of the day, aren’t going to go into betting parlors, they’re going to bet on their smartphones, they’re going to bet on their computers; yet another reason why it needs to be regulated.